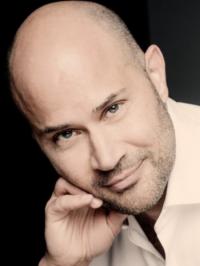 Born in 1968 in North Carolina, Mehta was acclaimed as a boy soprano (his fans included Leonard Bernstein), then went on to read German at Yale University and had a successful career as a record-producer before switching from baritone to countertenor; he credits David Daniels as the inspiration for the transition, and one of his early breakthroughs was recording the small role of the Christian Magician on Decca’s Gramophone Award-winning recording of Handel’s Rinaldo opposite Daniels in the title-role in 2000. Endowed with a particularly strong lower register, his signature-roles include Gluck’s Orfeo, Handel’s Tamerlano and Giulio Cesare, and Mozart’s Farnace in Mitridate, as well as The Boy in George Benjamin’s Written on Skin, which he created in 2012 at Aix-en-Provence and has recorded for Nimbus and (on DVD and blu-ray) Opus Arte. Other notable recordings include Che puro ciel: The Rise of Classical Opera (shortlisted for a Gramophone Award in 2014), and the title-role in Handel’s Orlando for René Jacobs in 2014 (which was the Radio 3 Building a Library Choice for the opera).