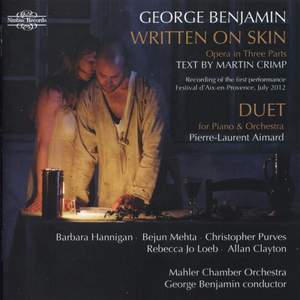 and Duet for piano and orchestra

[Purves] expresses a brooding pride and menace that makes your skin crawl. [Hannigan] makes an electrifying transformation from doe-like submissiveness to sexual predator, and the powerfully... — BBC Music Magazine, June 2013, 5 out of 5 stars More…

Chorus of Angels I

The Protector, Agnès and the Boy

The Protector and the Visitors

The Protector and the Boy

The Protector, Agnès and the Boy

Chorus of Angels and The Protector

'Written on Skin' is the second collaboration between George Benjamin and Martin Crimp. Their previous one-act opera 'Into The Little Hill' has been received with universal acclaim. Written on skin was jointly commissioned by The Festival d Aix-en-Provence and the Royal Opera House, Covent Garden and this recording was largely produced from a broadcast recording by Radio France in July 2012 at Aix. George Benjamin’s status as one of the UK’s leading composers has created unprecedented demand for the new opera.

“George Benjamin has written nothing better…and that’s saying something.”

[Purves] expresses a brooding pride and menace that makes your skin crawl. [Hannigan] makes an electrifying transformation from doe-like submissiveness to sexual predator, and the powerfully strange countertenor of Bejun Mehta...is ideally contrasted to these two...Even more riveting than the singing is the playing of the Mahler Chamber Orchestra...On every level it’s masterly.

The performance has nervous energy in abundance...the dark spirit of the drama is impressively sustained throughout, with the five singers giving their all and the Mahler Chamber Orchestra relishing the music’s startlingly distinctive range of colours and textures.

one of the most (more pessimistically: one of the only) unforgettable operas of the last decade or two, a work that seems both old-fashioned and fresh. Timeless, more like it. With a virtuosic cast and its composer leading a committed orchestral reading, it takes its rightful place among the classics.