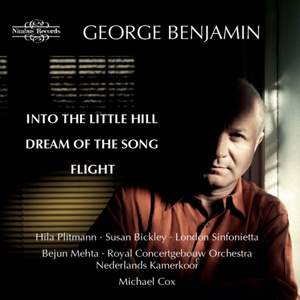 Benjamin: Into the Little Hill

The opera performance is reason enough to buy this disc, but it is equally welcome for the recording of Benjamin’s stunning recent song-cycle Dream of the Song…the settings range from Mehta’s... — BBC Music Magazine, July 2017, 5 out of 5 stars More…

IV. The Minister and the Stranger - Night Comes but Not Sleep

V. Interlude, Mother and Child - Why Must the Rats Die Mummy?

VI. Inside the Minister's Head

VII. The Minister and the Stranger, His Head Lies On His Desk - Between the Family Photograph

II. The Multiple Troubles of Man

III. Gazing Through the Night

VI. My Heart Thinks as the Sun Comes Up

Written in his late teens: Flight, for solo flute, whose swooping crests and curlicues are fervently relished in Michael Cox’s performance. Benjamin describes the piece as ‘inspired by the sight of birds soaring and dipping over the peaks of the Swiss Alps’. Listening to the piece you’ll hear a panoply of songs surfing the musical thermals in the alpine ether: low, long-breathed cries and calls, filigree flocks of ornamentation in the atmospheric heights of the flute’s register, a chorus of vapours conjured by a single instrument.

Into The Little Hill is based on the Pied Piper story, allowing audiences an immediate entry point into the opera’s dramaturgy. But Crimp’s re-telling simultaneously updates the story, with its politicians, photographs, and limousines, and opens up further mythic dimensions to the narrative. The drama of Into the Little Hill is concise, clear, and simultaneously ambiguous, even chilling. Benjamin says, ‘Martin’s text is hard-edged, formal, and hyper-condensed’. The reason for its musical and dramatic success is Benjamin’s unerring feeling for expressive characterisation. Each layer of Into the Little Hill’s score is immediately identifiable, from the Crowd’s baying cries of ‘Kill them’ right at the start of the piece, to the rodentine scurrying of the rat’s music, and the Mother’s lamenting grief in the last scene.

Dream of the Song is a mysteriously sensual and sensually strange song-cycle for countertenor, a halo of female voices that are similar in register, but so different in timbre and sound and expression, and orchestra. The counter-tenor sings poems, in English, by Jewish poets of 11th century Andalucia, themselves inspired by Arabic poetry of earlier centuries. There are images of ravishment and wonder here - moonlight, the celestial tent of the sky, a dream of a gazelle, a harp, a flute - but they are always undercut by other ideas. Above all, it’s the gossamer rapier of Benjamin’s music that cuts to the heart of these settings.

The opera performance is reason enough to buy this disc, but it is equally welcome for the recording of Benjamin’s stunning recent song-cycle Dream of the Song…the settings range from Mehta’s breathtaking stillness against quiet choral mutterings in ‘Gazing through the night’ to the searing exhortations for the choir alone of ‘Gacela del amor maravilloso’…this latest addition by Nimbus to the Benjamin discography is altogether essential listening

a rounded and absorbing programme...Hila Plitmann and Susan Bickley evince drama and intimacy aplenty in their multiple roles and Benjamin draws a superfine response from the London Sinfonietta in fastidious scoring (basset-horns and cornets prominent) that greatly enhances the mesmeric aura.

With its unsettling combination of Gothic claustrophobia and luminous beauty, Benjamin's first opera - a tense 30-minute two-hander, based on the story of The Pied Piper - has much in common with his recent award-winner Written on Skin; the composer conducts, revealing its uncanny beauties with superb clarity in its second outing on record.