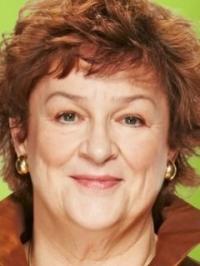 The English soprano Catherine Bott (born 1952) studied at the Guildhall School of Music and Drama, and specialises in baroque repertoire: following a stint with the British a cappella group The Swingle Singers, she worked regularly with Philip Pickett and the New London Consort, Christopher Hogwood and The Academy of Ancient Music, and John Eliot Gardiner and the English Baroque Soloists. Her discography includes Marc Minkowski’s Gramophone Award-winning recording of Stradella’s San Giovanni Battista with Les Musiciens du Louvre, Dido on Hogwood’s landmark recording of Purcell’s Dido and Aeneas in 1992 (‘breathtakingly well nuanced’ – BBC Music Magazine), London Pride (a recital of twentieth-century English song with David Owen Norris), and Mandane on the first commercial recording of Arne’s Artaxerxes for Roy Goodman and The Parley of Instruments (‘Bott gives a masterly performance’ – Penguin Guide to Recorded Music).

Find out more at https://en.wikipedia.org/wiki/Catherine_Bott