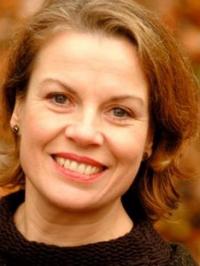 The Argentine mezzo Bernarda Fink was born to Slovene parents in Buenos Aires in 1955 and studied at the arts institute of the Teatro Colón. She is particularly acclaimed as a concert-artist and oratorio singer (her discography includes Nikolaus Harnoncourt’s Grammy-Award-winning recording of the St Matthew Passion, a collection of Mahler’s orchestral songs praised by Gramophone for her ‘classy musicianship and intelligence’, a Brahms recital with Roger Vignoles which was shortlisted for a Gramophone Award in 2007, and Mahler’s Symphonies Nos. 2 & 3 with Mariss Jansons), though she has also featured on numerous studio opera recordings, including the title-role in Gluck’s Orfeo, Cornelia in Giulio Cesare, Sesto in La clemenza di Tito and Idamante in Idomeneo for René Jacobs, and Genèvieve on Simon Rattle’s 2017 recording of Debussy’s Pélleas et Mélisande on LSO Live.