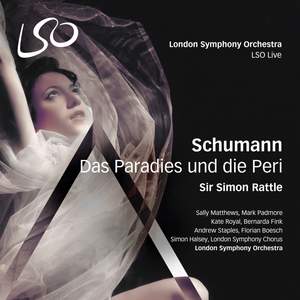 Vivid detail and clear choral textures come over quite stunningly on both formats, but the Blu-ray has the edge...Sally Matthews doesn't quite catch the ethereal quality Gardiner's Barbara Bonney... — BBC Music Magazine, January 2016, 5 out of 5 stars More…

No. 14 Im Waldesgrün am stillen See

In his debut recording on LSO Live, Sir Simon Rattle conducts a stunning performance of Schumann’s rarely recorded 'Das Paradies und die Peri' featuring a superb line-up of soloists. Rattle is well-known for being a champion of this work, yet this is his first audio recording of it. It is brought to life by the LSO and a starry line-up of soloists under his baton, making the best possible case for Schumann’s oratorio.

Sir Simon Rattle says of the piece, "It’s the great masterpiece you’ve never heard, and there aren’t many of those now...In Schumann’s life it was the most popular piece he ever wrote; it was performed endlessly. Wagner wrote how jealous he was that Schumann had done it and he’d stolen this subject that he wanted to do and how extraordinary it was".

Based on an episode from Thomas Moore’s epic poem 'Lalla Rookh', itself inspired by exotic, colourful tales from Persian mythology, 'Das Paradies und die Peri' reflects the 19th- century craze for all things Oriental. Completed in 1843, Schumann’s secular oratorio tells how the Peri, a legendary creature, was expelled from paradise and follows her quest to redeem herself by giving the gift that is most dear to heaven. Writing about the work in a letter to a friend, Schumann said, "at the moment I’m involved in a large project, the largest I’ve yet undertaken – it’s not an opera – I believe it’s well-nigh a new genre for the concert hall."

Conceived in three beautifully sequenced parts, it is unlike any oratorio of Schumann’s day. Sustained melodic invention is clear throughout, with Peri’s high C in the finale forming a deftly timed climax. Soprano Sally Matthews gives a soaring performance as Peri, showcasing Schumann’s imaginative and emotive vocal writing, and there are superb supporting performances from Mark Padmore, Kate Royal, Bernarda Fink, Andrew Staples and Florian Boesch. This release is the major priority of the autumn. A promotional trailer with Sir Simon Rattle and full collection of photography will be available to accompany the release and marketing activity. Sir Simon Rattle [& Bernarda Fink] will perform Debussy's 'Pelleas et Mélisande' in London with the London Symphony Orchestra and London Symphony Chorus on the 9th and 10th January 2016 which will be recorded for LSO Live.

Vivid detail and clear choral textures come over quite stunningly on both formats, but the Blu-ray has the edge...Sally Matthews doesn't quite catch the ethereal quality Gardiner's Barbara Bonney radiates...but is still superb and the other soloists hardly less so, especially Mark Padmore's restrained but moving Narrator...the LSO chorus sing with arresting fervour. A pleasure to recommend.

There's no hiding either Rattle's eloquent advocacy of the work or the encouraging signs regarding his rapport with the orchestra, who play superbly for him. Phrases are invariably beautifully turned, and there is evidence of real care having been taken throughout.

You can really tell that Rattle loves this work. His approach is full of affection — listen to the care he lavishes on the stunning ending of Part Two — but also architectural breadth.

Stylistically it often sounded to me like a hybrid of Brahms's German Requiem and Mendelssohn's Elijah...The whole piece is narrated by tenor Mark Padmore, and he is in quite extraordinary voice here: the hushed passage where he describes the Peri arriving in a plague-stricken land is nothing short of spine-tingling, with an amazingly mournful horn solo, so simple on the page and yet when brought to life by such expert players as the LSO it becomes an astonishingly poignant moment.

the LSO’s playing, and especially the singing of the chorus, bristles with the ardour of a new love affair, and the mawkish Victorian morality of a Peri banished from Paradise, who wins re-entry at a third attempt by presenting the gods with the remorseful tear of a sinner, is brought vividly to life.

Rattle’s ability to elicit delicate sonorities turns the entire three-part, ninety-minute oratorio into one gently undulating statement. [The soloists] shine as an ensemble, their massed efforts well-blended and musicianly, projecting a real sense that they have entered into the corporate spirit of this remarkable performance.

it’s the vivid intimacy of the best recitals that Rattle, his players and choice cast achieves here. Matthews is utterly convincing in the taxing role of the Peri, Padmore a forthright, crystalline Narrator, while the quartet of Kate Royal, Bernarda Fink, Andrew Staples and Florian Boesch is luxury casting

The LSO shows its delicate and soulful side… the Chorus is at its best and convinces by its presence… This is a very good recording which, by force, dynamism and sensibility, does entirely justice to this wonderful romantic work.