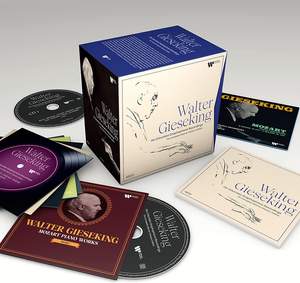 Mendelssohn: Song without Words, Op. 19b No. 6 in G minor 'Venetianisches Gondellied'

Mendelssohn: Song without Words, Op. 30 No. 6 in F sharp minor 'Venezianisches Gondellied No. 2'

Mendelssohn: Song without Words, Op. 38 No. 6 in A flat major 'Duetto'

Mendelssohn: Song without Words, Op. 53 No. 2 in E flat major

Mendelssohn: Song without Words, Op. 62 No. 5 in A minor 'Venetianisches Gondellied No. 3'

Mendelssohn: Song without Words, Op. 67 No. 3 in B flat major

Mendelssohn: Song without Words, Op. 85 No. 6 in B flat major

Mendelssohn: Song without Words, Op. 102 No. 5 in A major 'Childrens Piece'

“The whole conception of performance in these days is too heavy, loud and blatant,” said Walter Gieseking in 1926, expressing his preference for “more delicacy and ethereal refinement of tone”. That same year the New York Times praised the German pianist for “achieving unusual richness and fineness of effect within a relatively small dynamic scale,” noting “his poetic sentiment and imagination, the intimacy of his musical expression and his exquisite adjustment of tone values.” Gieseking’s finesse, imagination and sureness of touch brought him special and lasting distinction in the solo piano works of Debussy and Ravel, which he recorded in their entirety. The complete solo piano works of Mozart are another pillar of this 48-CD collection. Demonstrating the breadth of Gieseking’s musical interests, it ranges from Bach to composers of the generation that followed Ravel. Fascinated by the processes of sound reproduction, Gieseking was exceptionally productive in the studio, and this set includes nine world-premiere releases and a substantial number of CD premieres and rarities. The entire collection has been newly remastered – using the best available sources for the 78-era recordings and the original tapes for those from the age of the LP.

This 48-CD set unites all the recordings that the pianist Walter Gieseking (1895-1956) recorded between 1923 and 1956 for the following labels: Columbia Graphophone (78s and LP) and Homocord (78s). The collection includes nine world-premiere releases and a substantial number of CD premieres and rarities.

Walter Gieseking (1895-1956) is most closely identified with the piano music of Debussy and Ravel, but, as this 48-CD set demonstrates, this phenomenally gifted musician commanded a repertoire that ranged from Bach to composers of the generation that followed Ravel – Gieseking himself among them.

Born in Lyon, France, to German parents, Gieseking started to play the piano at the age of four and trained at the Hannover Conservatory. He made his Berlin recital debut (playing Debussy and Ravel) in 1920. His distinguished career encompassed regular appearances in Europe and the USA, although, having remained in Germany during the Nazi era, he aroused some controversy when he visited America after World War Two.

Stylistically multi-faceted, Gieseking took a specific approach to each composer whose music he interpreted, shaping a particular soundworld in every case.

In the concert hall, composers whose works Gieseking advocated in the earlier years of his career included Schoenberg, Busoni, Hindemith, Pfitzner, Szymanowski, Korngold, Toch and Schulhoff.

Gieseking was gifted with a photographic memory and an extraordinary facility for sight-reading even complex scores. He did not need spend hours and hours practising in order to achieve his desired results and was exceptionally productive in the recording studio.

Gieseking was not a conventional virtuoso. In an interview in 1926, he said: “The whole conception of performance in these days is too heavy, loud and blatant. I prefer less power but, instead, more delicacy and ethereal refinement of tone.” The same year, when he played a recital in New York, the New York Times wrote: “He does not seek to startle or storm the audience by violently assaulting the keyboard. He achieves unusual richness and fineness of effect within a relatively small dynamic scale … [His] distinctions are … his poetic sentiment and imagination, the intimacy of his musical expression and his exquisite adjustment of tone values.”

In 1996, a CD reissue of the Complete Piano Works of Debussy received a Gramophone Award. This was the magazine’s comment: “Debussy and Gieseking form an inseparable union where creator and recreator become one and the same person. Had Debussy lived to hear Gieseking he would surely have marvelled at such an uncanny identification with his very spirit, at performances which mirror a pantheism evoking and transcending the play of the elements themselves … In such hands it is virtually impossible not to see the sun break out at a crucial point in ‘Jardins sous la pluie’ … or not to sense the ultimate negation behind ‘Des pas sur la neige’. No one has ever equalled Gieseking's sense, in the Children's Corner suite, of a lost and enchanted land, of childhood revisited through adult tears and laughter. And in the greatest of all sets of Études Gieseking unforgettably resolves Debussy's pragmatism, suggesting an iridescence un-dreamed of even by Chopin.”

Five years later, assessing Gieseking’s entire reputation, Gramophone wrote: “He created a sound world in this repertoire [Debussy and Ravel] that had no precedent, except perhaps in the composers' imaginations ... His unique mastery of the impressionists, however, sometimes overshadows the wider scope of his pianistic and musical proclivities.”

Among the world-premiere releases in this new box is Debussy’s Suite Bergamasque, recorded in Zurich in 1951.