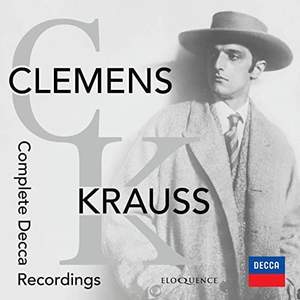 The most comprehensive collection ever issued of Clemens Krauss’s commercial legacy of recordings, newly remastered and presented as an original jackets limited edition.

In Mark Obert-Thorn’s new remasterings for this Eloquence box set, we can appreciate anew the genius for colour, pacing and timing which made Clemens Krauss the unrivalled conductor of his day in the music of Johann and Richard Strauss. He began recording for Decca in 1947 – three sessions of Brahms in London including a famous account of the Alto Rhapsody which found Kathleen Ferrier in glorious voice – allowing for less than eight years of activity in the studio before the conductor’s untimely death from a heart attack in May 1954, hours after conducting a concert in Mexico City.

In that time, however, Decca secured Krauss in much of the repertoire for which he was renowned as a peerless interpreter. A Richard Strauss series captured all the major symphonic poems except the Alpine Symphony, plus a complete Salome with Christel Goltz, and, for Polydor (Deutsche Grammophon) the rapturous final Trio from Der Rosenkavalier recorded in pre-war Berlin with his wife, the soprano Viorica Ursuleac, as the Marschallin. Unlike many later recordings, these are not performances which pull out the modernist strands in Strauss’s form and harmony. Rather they place the composer in a lineage of lyricists and musical dramatists stretching back to Mozart. Strauss himself apparently regarded Krauss as the supreme conductor of his generation, supporting the younger man’s rise to a succession of top jobs of 1930s and 40s Austria and Germany.

During the war, Krauss founded the tradition of New Year’s Day concerts in Vienna, and Decca capitalised on their popularity with three albums which have become touchstones of interpretation in the music of the Strauss family – ‘by turns committed and distanced, never pasteurized or bent on proving anything’, as Carlos Kleiber remarked of the Decca recording of Die Fledermaus, which became a library choice for the work as soon as it was released in January 1951.

The trio of Beethoven concertos with Backhaus has also been a perennial favourite among collectors; much less familiar is the album of Leonore/Fidelio overtures which marked the premature end to Krauss’s Decca career, charged with visceral intensity and elevated by needle-point rhythmic detail. Sleeves feature the original Decca covers and the booklet includes a survey of Krauss’s remarkable life and times by Peter Quantrill.