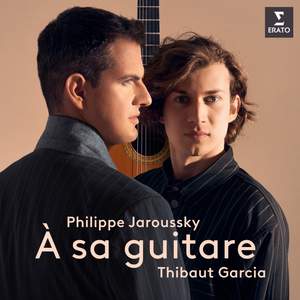 This eclectic, if not eccentric song recital by the musically promiscuous French countertenor Philippe Jaroussky should not work. That it does, and so convincingly, is down to the fastidious... — Gramophone Magazine, December 2021 More…

Purcell: When I am laid in earth (from Dido and Aeneas)

The first joint album from countertenor Philippe Jaroussky and guitarist Thibaut Garcia, À sa guitare takes its name from a song by the 20th century French composer Francis Poulenc. But its frame of reference is extraordinarily wide – both culturally and stylistically. Its 22 tracks range across 400 years and music by composers and songwriters from France, Britain, Austria, Italy, Spain, Brazil, Argentina and the USA. “The album is a journey between different cultures, different continents and different languages,” says Philippe Jaroussky, “but each piece is a world in itself. The idea was to take some risks … sometimes moving to a completely different world between one track and the next.” “We can evoke hugely different colours as we juggle between renaissance music and a song by Barbara,” explains Thibaut Garcia. “It’s our job to play with a palette of colours to produces something unique … We put a great deal of thought into the album, but we also put our hearts into it.”

This eclectic, if not eccentric song recital by the musically promiscuous French countertenor Philippe Jaroussky should not work. That it does, and so convincingly, is down to the fastidious artistry and unerring good taste of both Jaroussky and [Garcia].

who knew that Schubert’s Erlkönig could sound still more unsettling when the piano’s percussive ostinato is replaced by a whispering tremolo that evokes the ‘streaks of mist’ and ‘rustling leaves’ in all their eerie glory? Garcia’s virtuosity here is quietly breathtaking, whilst Jaroussky's trademark crystalline sweetness plays up the uncanny connection between the predatory Fairy-King and his terrified prey.

their recital bursts with the unexpected…Purists – do they still exist? – might shudder at this elegant merry-go-round, but for the rest of us this is an album full of pleasures.