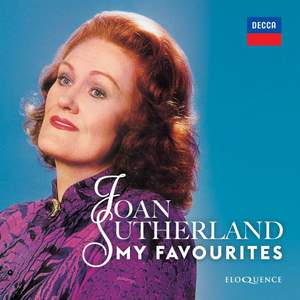 My Favourites represents her own top choices and certainly showcases her amazing technical skills, never more fully on display than in this truly astonishing ‘Ah! non giunge’… Occasionally her... — BBC Music Magazine, May 2021, 4 out of 5 stars More…

Glière: Concerto for Coloratura Soprano and Orchestra, Op. 82: I. Andante

Benedict: The Gypsy and the Bird

Fraser-Simson: Love Will Find A Way (from The Maid of the Mountains)

Dame Joan Sutherland’s personal selection of her favourite recordings, with her own liner notes. Tributes from Moffatt Oxenbould and Fiona Janes, previously unpublished photographs, a series of costume designs for her key operatic roles, and illustrations of all the original jackets from which the selection was made. Plus her recipe for Christmas Pudding, all issued to commemorate the tenth anniversary of her passing.

With barely a shadow of permissible exaggeration, ‘The Voice of the Century’ was Decca’s title for a 1977 compilation of arias from the defining roles sung by Dame Joan Sutherland. On her death in 2010, Opera magazine acclaimed her still as ‘one of the voices of the century’ who almost single-handedly – with the support of her husband and mentor, Richard Bonynge – restored the bel canto repertoire to the opera house. Now, a decade on, Eloquence releases Sutherland’s personal selection of her own favourite recordings, from a Decca catalogue studded with award-winning albums.

What makes this particular collection unique, and an essential acquisition for all who treasure their memories of the supreme successor to Melba, is Dame Joan’s introductions to each item. Choosing them, she could look back over a career spanning more than 40 years, from her career-launching competition win in Sydney in 1949 singing ‘Ritorna vincitor’ to her first Alcina in 1957 – at St. Pancras Town Hall, of all places, and her famous Royal Opera Lucia in 1959 that floored the critics.

However, Dame Joan’s selection does not include such vocal blockbusters – though with the Queen of Night’s ‘O zittre nicht’ there is a nod to her unheralded Royal Opera debut in 1952 as the First Lady in Die Zauberflöte. Rather than her fearless negotiation of their Mad Scenes, she chose passages of moving recovery from Norma and La sonnambula, and in doing so generously acknowledges her partnership of warm mutual understanding with Marilyn Horne. Nevertheless, there is plenty of her pinpoint coloratura to be enjoyed, from Massenet’s Esclarmonde – along with Norma, her favourite opera – to Graun’s Montezuma and Glière’s Concerto: ‘such a relief not to have to remember the words’.

Sutherland took particular pride in her revival of rarities such as Leoni’s L’Oracolo, but her choice of favourites concludes in lighter vein with songs by Arditi, Hahn and Kreisler which beguiled as well as dazzled her recital audiences: ‘Trifles, perhaps, but I enjoyed singing them’. She recalls living next to and working with Noël Coward – ‘I think he was quite pleased with me!’ – and finally pays tribute to her musical education in Sydney with ‘Love will find a way’ from The Maid of the Mountains. All in all, it’s a unique journey through Dame Joan’s life and career, enhanced by several tributes from her colleagues, previously unpublished photographs and rarely seen costume designs for ‘La Stupenda’ in many of her signature roles.

My Favourites represents her own top choices and certainly showcases her amazing technical skills, never more fully on display than in this truly astonishing ‘Ah! non giunge’… Occasionally her faults – fuzzy diction, droopy tone – show too; but there are huge amounts of remarkable singing in this fine introduction to her art.