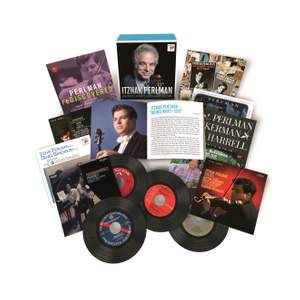 Legrand: Papa can you hear me? (from Yentl)

Williams, John: Far and Away: Theme

Legrand: Les Parapluies de Cherbourg: I will wait for you

Previn: Theme from "Four Horsemen of the Apocalypse"

Steiner: Tara's Theme (from Gone With The Wind)

Williams, John: Memoirs of a Geisha

Halvorsen: Passacaglia and Sarabande for Violin and Viola

Walton: Canzonetta and "Touch her soft lips and part" from "Henry V"

In celebration of the great Israeli-American violinist’s 75th birthday, Sony Classical is proud to present the first-ever collection of Itzhak Perlman’s complete recordings for RCA and CBS/Sony in a single box set: 18 CDs spanning the years 1965 to 2012.

Itzhak Perlman has dominated the world of violin virtuosos for half a century. His TV appearances had al- ready made him a household name in the US by the time he was 13. A few years later came his Carnegie Hall debut, then the prestigious Leventritt Award, followed by triumphant tours of Israel, North America and Europe between 1965 and 1968. By then he was an international celebrity and recognized “not just as the finest violinist of his generation but as one of the greatest musical talents to emerge since World War II” (leading string authority Tully Potter writing in the NEW GROVE)

John Williams, the legendary composer for the silver screen, was Perlman’s collaborator in another medi- um, the movies: his two best-selling ‘Cinema Serenade’ albums arranged and conducted by Williams, with Perlman featured in selections from such classic films as ‘Modern Times’, ‘Gone with the Wind’, ‘The Ad- ventures of Robin Hood’, ‘The Umbrellas of Cherbourg’, ‘Out of Africa’, ‘Cinema Paradiso’, ‘The Color Purple’ and, of course, the theme that Perlman memorably performed on the soundtrack of Williams’s Os- car-winning score for the Spielberg masterpiece ‘Schindler’s List’

New to Perlman CD editions are two complete soundtrack albums: John Williams’s “elegant and thoughtful score” for ‘Memoirs of a Geisha’ in which the violinist is joined by Yo-Yo Ma and to which Perlman “brings a magical and peculiarly oriental sound to his violin-playing” (Gramophone), and the music for Yimou Zhang’s Hero by Tan Dun: “Few composers today write more effective melodies for bowed strings” (Gramophone). And to round off this uniquely wide-ranging survey of the violinist’s musical pas- sions and triumphs, in its first appearance in a Perlman collection, the artist is joined by golden-voiced can- tor Yitzchak Meir Helfgot in Eternal Echoes, a highly praised album of liturgical and traditional selections which the violinist has affectionately described as “Jewish comfort music – everything that I recognize from my childhood is in this program.”