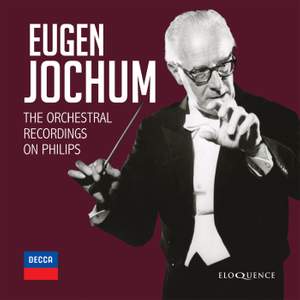 Bruhns: Praeludium No. 3 in E Minor

According to one former violist in the Concertgebouw Orchestra, Eugen Jochum was the type of conductor who doesnt put on spectacular performances, but whose music-making always bears the stamp of honesty. He is enthusiastic during a concert and also conveys his intentions to the orchestra without any affectation. The sincerity and integrity of Jochums musical character is conveyed with a unique sweep across his mastery of Austro-German repertoire operatic as well as symphonic music in this new Eloquence Classics box set dedicated to his recordings for the Dutch Philips label. The first five discs present the second of the conductors complete cycles of Beethoven symphonies, made in the late 1960s. In its plain-spoken but beautifully recorded and played way, this Amsterdam cycle stands the test of time against his earlier Berlin and later London cycles, not least thanks to the particularly harmonious relationship cultivated by Jochum with the great Dutch ensemble (he shared the chief conductorship with Bernard Haitink for three years). These Philips recordings continue with more Beethoven, a collection of overtures, several receiving their first international release on CD, and a Fifth Symphony from Berlin in 1951. Other notable rarities are saved for the last disc: a solo-vocal Magnificat by Rudolf Mengelberg (cousin of the conductor Willem), recorded in Jochums first studio sessions with the Concertgebouw in 1952, and a short sequence of organ works played by Adalbert Meier. This formed Side 4 of the original release of Bruckners Fifth Symphony, recorded live at the Rococo splendour of the basilica attached to the Benedictine monastery of Ottobeuren in Bavaria, which was celebrating the 1200th anniversary of its foundation in 1964 when the Concertgebouw gave a performance there unique even in Jochums distinguished Bruckner discography for its radiance as well as its unerring sense of pulse. At the centre of the new Eloquence box, Jochums often-underrated way with Wagner and Strauss is well represented by his Philips recordings of overtures and tone-poems (including two versions each of Don Juan and Till Eulenspiegel, from 1952 and stereo remakes from 1960). There are four grand and splendid accounts of late Mozart symphonies, as well as a pair of piano concertos by Beethoven and Mozart recorded with the Bamberg SO and his daughter Veronica, who also contributes to Niek Nelissens fascinating note for this unrivalled collection of her fathers work.

The interpretation is masterly. I enjoyed this performance thoroughly in fact, I enjoyed it more than any other I have heard on record. Gramophone, October 1954 (Till Eulenspiegel)

[The Concertgebouw] plays for him as well as it ever has on records. Among the fine features of these performances are the lovely, singing tone in cantabile passages, the masculine vigor of the tuttis, the extreme care in the choice of bowings in order to obtain the best articulation ... As a performance, KV 504 has no recorded superior. High Fidelity, July 1962 (Mozart: Symphonies Nos. 36 & 38)

Exciting renditions that are properly weighty and festive in mood. The excellent orchestral work is clean and precise, and the authoritative conducting is full of sprit, with well-chosen tempi. Stereo Review, October 1962 (Mozart: Symphonies Nos. 36 & 38)

This performance is in the end extremely satisfying, whatever one's puristic objections. The slow movement is very good, and so is the Scherzo. Musical Times, February 1966 (Bruckner: Symphony No.5)

The entire project has been carried through with the greatest possible care ... flawless orchestral performance coupled with recorded sound that makes utterly clear, without any loss of warmth, every detail of line and color written into the music. Special compliments are in order for the fine team of vocal soloists and the excellent choral work in the Ninth Symphony. Stereo Review, September 1970 (Beethoven: Symphonies Nos. 1-9)

Every now and then a record one is tempted to ignore because the material is so overexposed turns out to be exceptionally or even irresistibly attractive: Jochum's Beethoven Fifth with the Concertgebouw Orchestra on Philips was a notable example. Stereo Review, May 1974 (Beethoven: Symphony No. 5) His performances of the Mozart symphonies were incomparable, combining as they did both rhythmic vigour and a high degree of sensitive warmth A Philips recording of Nos. 36 and 38 shows him at his best in this music. Gramophone, March 1998 Highly distinctive recordings always dashing and stylish. Gramophone, December 1998 (Schubert, Schumann symphonies)

This Philips version [of Bruckners Fifth] retains a certain ritualistic symbolism, owing as much to the devotional setting in which the recording was made as to Jochums old-fashioned interpretive values [it] also has a sense of occasion not matched by the Dresden (EMI) or Munich (DG) versions. Classics Today, 2001

Exciting renditions that are properly weighty and festive in mood. The excellent orchestral work is clean and precise, and the authoritative conducting is full of sprit, with well-chosen tempi. Stereo Review, October 1962 (Mozart: Symphonies Nos. 36 & 38)