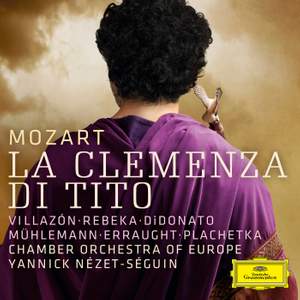 "Adesso, oh Sesto, parla per me"

This is the fifth instalment of DG’s series of seven Mozart operas conducted by Yannick Nézet-Séguin, and initiated by Rolando Villazón, in collaboration with Festspielhaus Baden Baden and with the generous support of ROLEX For La Clemenza di Tito, Mozart’s last opera about the benevolent Emperor Titus who pardons an attempt on his own life, Rolando and Yannick – new music director of the MET – are joined by outstanding partners: A stellar cast in every role and specialist handpicked orchestra playing at their best in the stunning venue of Festspielhaus Baden-Baden Rolando adds yet another intriguing Mozart role to his already large discography. This time it is his role debut as Tito, reinforcing again his love for Mozart: “No composer has spoken to as directly as Mozart. I feel like I have a soul mate in him.”

Apart from her gorgeous voice, DiDonato possesses a grace perfect for the role, soaring to expressive heights in her final six-minute aria…Marina Rebeka is DiDonato’s ideal vocal and dramatic foil…What’s special about this Clemenza is Yannick Nézet-Séguin’s trust in Mozart’s lyricism, heard for instance in the huge space he gives the soloists for their tender numbers. The conductor has created a production that’s as sensitive as it is exuberant.

As before in this series, the luxury all-star casting is predominantly but not entirely spot-on. Any Mozartian with a pulse ought to be moved by Joyce DiDonato’s passionate Sesto…Regula Mühlemann’s dulcet Servilia…Tara Erraught’s blithe Annio and Adam Plachetka’s resonant Publio. Less happily, Villazón’s effortful strain hampers arias that require limpid finesse.

This Sesto strikes me as DiDonato’s finest achievement on record so far…She’s matched by Marina Rebeka in thrillingly uninhibited form…The supporting parts are very well taken, and more than that in the matter of Tara Erraught’s warm-spirited, generously sung Annio…[Villazón’s] Tito comes alive in recitative…but proves all too often uncomfortably tight-sounding in the formal musical numbers.

After a slightly lacklustre Nozze di Figaro a couple of years ago, the dramatic temperature is back to white-hot, and the women in particular are as fine as any I’ve heard on record…Rebeka sweeps all before her as the venomous Vitellia, completely in command of the role’s notoriously wide compass...DiDonato is on blazing form...Villazón is his idiosyncratic self as the titular Emperor.

A surprisingly “old-school” Tito from the Met’s new music director boasts exceptional performances from Joyce DiDonato (a Sesto up there with the best on disc), Tara Erraught and Regula Mühlemann. Marina Rebeka’s Vitellia is more controversial: less beautifully sung than Baker’s or Varady’s, but vivid.

DiDonato’s Sesto is vibrant and memorable. So too is Marina Rebeka’s Vitellia, a larger-than-life performance that right away establishes the volatility of the character...The main idiosyncrasy is Villazón...Some listeners will find his warm, passionate portrayal of the merciful emperor an antidote to the generic, antiseptic style in which Mozart can be played today; others will balk at his expressive tuning, and wonder why he sounds as if he is limbering up for Nessun Dorma.

In vocal terms, as usual, Villazón holds the wild card. He departs from selected notes with a greasy glide, often landing on others in the same way. Yet his expressive liberties stop Tito from seeming a dramatic contrivance needed to shape the customary opera clash between love and duty. With their lively phrasings and sharp attack, there’s also something refreshingly surprising about Nézet-Séguin and the Chamber Orchestra of Europe.