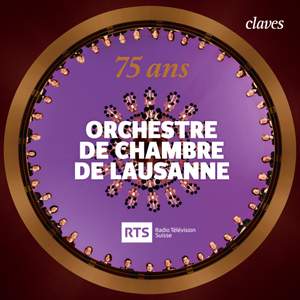 Hindemith: Kammermusik No. 4 Op. 36 No. 3 Violinkonzert

Schubert: Rondo for violin and strings in A major, D438

The Lausanne Chamber Orchestra (OCL), founded in 1942 by violinist Victor Desarzens, has continued to spread its wings to become one of today’s most sought-after chamber orchestras in Europe. The OCL’s latest tour de force was the appointment in 2015 of US citizen Joshua Weilerstein, one of the most promising young directors of the new generation, as its artistic director. The OCL is a classical orchestra (an orchestra with about forty instrumentalists) influenced by the Mannheim school, covering a vast repertoire ranging from early Baroque to contemporary music.

From its beginnings, the OCL was invited abroad, participating at the the Festival d’Aix-en-Provence from the second edition on. The concert tours first in Germany and then in the United States were a resounding success, as were its more recent performances at the Theatre of Champs Elysées in Paris or at the BBC Proms in London, the Musikverein in Vienna and the BBC Proms in London. Among the OCL’s recent guest appearances, it is worth mentioning the Mariinsky Theatre in St. Petersburg, the Rostropovich Festival in Moscow and the Istanbul Festival. In 2017-2018, the OCL will performe for the first time at the Concertgebouw in Amsterdam and at the Wiener Konzerthaus.

The OCL’s concerts showcase the work of great soloists of the past and of rising stars, including pianists from Clara Haskil, Alfred Cortot, Walter Gieseking and Edwin Fischer to Murray Perahia, Radu Lupu, Martha Argerich and Nikolai Lugansky; violinists from Arthur Grumiaux to Frank Peter Zimmermann; cellists from Paul Tortelier to Truls Mørk; and flutists from Jean-Pierre Rampal to Emmanuel Pahud. The biggest names have contributed to its renown, and continue to do so, which is testimony of the trust they place in the OCL.

The OCL has a history of attracting the most compelling conductors of the time, and has benefited from a wide variety of influences under the baton of the likes of Günter Wand to Charles Dutoit; Paul Hindemith to Ton Koopman; or Jeffrey Tate to Bertrand de Billy (the current principal Guest Conductor). The OCL has an impressive discography perfectly in phase with the OCL’s historical identity. The OCL’s recordings constantly mirror its spirit of openness, starting with a recording of all of Haydn’s operas conducted by Antal Dorati from 1970 to 1980 to the Beethoven concertos played by Christian Zacharias (released on DVD by Bel Air Media in 2013), including new recordings by Alpha of the piano pieces by Schönberg and Webern (with Heinz Holliger) and of Spohr (with Paul Meyer). The first recording conducted by Joshua Weilerstein is dedicated to Stravinsky (released by MDG in Spring 2016).

The OCL is housed in the Salle Métropole, which is ideally located in the heart of Lausanne. The OCL is also a regular guest at the opera pit of the Opéra de Lausanne and is the preferred partner of many institutions in the region, including the University of Music of Lausanne, the Manufacture (Haute cole des arts de la scène), the Pierre Gianadda Foundation in Martigny, the Avenches Opera Festival and the Clara Haskil Piano Competition in Vevey. Moreover, the OCL is a long-standing partner of the Swiss radio and television company Radio Télévision Suisse (RTS), and has provided concerts and musical arrangements for the company’s programmes since the beginning of the partnership. In return, the OCL benefits from RTS’ vast national and European broadcasting network. Under this partnership, RTS’ cultural radio station Espace 2 records the OCL’s concerts and makes them available to the public on demand on its website: www.espace2.ch.

The high ranking of the OCL is of course the result of the concerts it has produced featuring prestigious guest soloists and conductors, but it is due primarily to the strong identity forged over the years by a small number of artistic directors. The first artistic director was Victor Desarzens (1942-1973) who founded the OCL, and left his mark on the history of the orchestra with his tireless commitment to promoting the work of Swiss composers (in particular the work of Frank Martin). He was followed by Armin Jordan (1973-1985) who brought the OCL to the world stage with his recordings (distributed by Philips and Erato). The following artistic directors include Lawrence Foster (1985-1990), Jesus Lopez-Cobos (1990-2000), and Christian Zacharias (2000-2013), the latter of whom recorded an exceptional complete set of Mozart piano concertos released by MDG. Artistic director since 2015 Joshua Weilerstein has declared his intention to pursue the work of his predecessors while producing bold st programmes and making more efficient use of new media to bring the OCL into the 21 century.