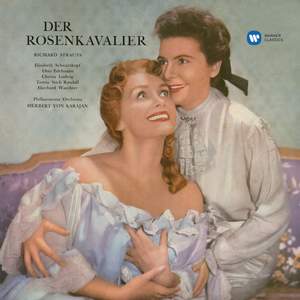 Released in 1957 this version is newly remastered from the original tapes and presented as a hardback book with full libretto.

This magnificent 1956 recording, conducted with genius by Karajan and with a cast such as dreams are made of, has an unparalleled status and is unlikely to be challenged for many a year.’ - Gramophone

‘This remastering comes from the original analogue tapes and has been transferred at high resolution digital quality to capture the very best sound from the tapes. In consultation with the original engineer Chris Parker, we have slightly adjusted the balance of the Trio (in Act 3) to reflect the quality of sound that was desired but not achieved at the time of recording. This recording was originally made as a mono recording by Douglas Larter, with a stereo test version engineered by Chris Parker. It is this stereo test version which has been used for this remastering. Despite the early experimental nature of this new ‘stereo’ technology, this recording is captured in astonishingly vivid sound and is a testament to the experience, understanding and skill of both the musicians and engineers of the time.’