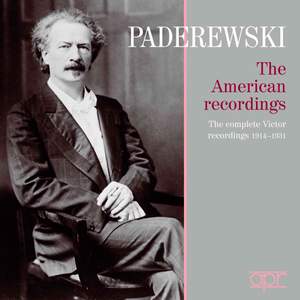 83 tracks featuring works by Beethoven, Brahms, Chopin, Couperin, Debussy, Liszt, Mendelssohn, Rachmaninov, Rubinstein, Schubert, Schumann, Strauss/Tausig, and works by Paderewski himself and two of his disciples, Ernest Schelling and Sigismund Stojowski. The set concludes with two bonus tracks recorded in 1941 of Paderewski’s address on the occasion of the golden jubilee of his American debut.

Ignacy Jan Paderewski (1860–1941) must be counted as one of the most famous pianists who ever lived, and he was certainly the most financially successful, yet his recorded legacy has always been something of a puzzle. Paderewski was from a generation before these recorded pianists, such as Cortot, Hofmann, Rachmaninov & Schnabel, we now tend to think of as ‘historical’ and his playing style really does take us back to the 19th century. This indispensable set makes available for the first time every surviving matrix from his most prolific recording contract – that with the US Victor company. In conjunction with APR’s earlier releases ‘Paderewski – his earliest recordings’ (APR6006) and ‘Paderewski– his final recordings’ (APR5636) there is now, at last, a complete Paderewski recorded edition.