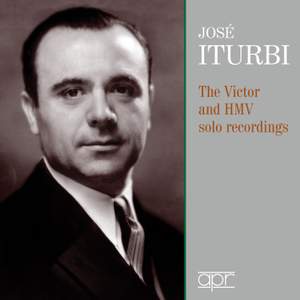 What a pleasure to encounter the full extent of Iturbi’s superb piano playing and elegant musicianship...Beethoven’s Andante favori is a model of tenderness and poise. It also prominently displays... — Gramophone Magazine, September 2016 More…

I. Theme and Variations: Andante grazioso

Estampes: No. 3. Jardins sous la pluie (Gardens in the Rain)

Stories and Fantasies: No. 5. The Old Moorish Castle

Spanish pianist José Iturbi (1896-1980) was a pupil of Landowska and Victor Staub at the Paris Conservatoire and after graduation in 1913 he began a successful career in Europe; however after a sensational US debut in 1929 he worked more and more in the USA where he relocated. While continuing as a successful pianist he started a parallel career as a conductor and directed many American orchestras over the next 40 years. Perhaps his greatest claim to popular fame was his appearances in several Hollywood films, which has however tarnished his posthumous reputation, leading him to be dismissed as a ‘cross-over’ artist; however this is to do him a disservice as his music making retained the highest standards of craftsmanship. He made comparatively few solo recordings considering his wide repertoire but he excelled at the Spanish and French repertoire, both of which are well represented in these recordings.

What a pleasure to encounter the full extent of Iturbi’s superb piano playing and elegant musicianship...Beethoven’s Andante favori is a model of tenderness and poise. It also prominently displays that inerrant rhythmic undergirding that lends Iturbi’s interpretations, regardless of shifts in interpretative fashion, their perennial freshness.