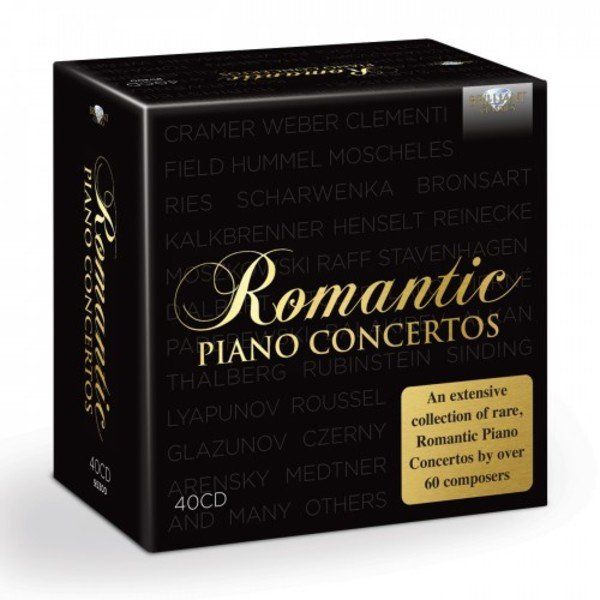 Piano Concerto in A Minor, MWV O2: I. Allegro

Mayr: Piano Concerto No.1 in C

Piano Concerto No. 1 in C Major: I. Allegro moderato

Why is it that, when asked to name the most magnificent piano concertos of the Romantic age, only a select few spring to mind? And while these may have been recorded numerous times, why do we allow other concertos of the period to languish in obscurity?

This exciting new release aims to shine a light on those other pieces from the period, which deserve to be better known. It takes in over 60 composers and runs the full gamut of the age we now call ‘Romantic’ – from the initial stirrings of Romanticism in the works of Clementi and Stamitz, through the early adopters such as Field and Hummel, to the passionate virtuosity of Liszt, Saint‐Saëns and Lalo, as well as those neo‐ Romantic composers who looked fondly back to the era, such as Samuel Barber.

Although some of the earliest composers on this boxset are essentially Classical, it is not difficult to detect qualities we now call ‘Romantic’ evident in the composers’ writing, as they leaned away from the restraint, symmetry and clarity of the Classical period. Among those on this release are Stamitz, Hoffmeister and Paisiello, who went on to influence some of the most important composers of the 18th and 19th centuries. These composers, born towards the end of the 18th century, were just beginning to benefit from new advances in the development of the piano; it would be up to their successors to exploit these fully. Born around the same time was John Field, an Irish composer, who was the forerunner of the Romantic period and is best known as the instigator of the nocturne. Five of his piano concertos feature on this release, revealing the composer’s foreign influences, as – having spent much of his life in Russia – he began to add local flair to his works, such as the balalaika.

Almost an exact contemporary of Field was Hummel, who taught Czerny, who went on to teach Liszt. Hummel – who himself had been taught by Mozart – was one of the greatest virtuosi of his time, and his A minor and B minor piano concertos were standard repertoire works of the early 19th century, studied by all the budding virtuosos of the period. The concept of a ‘virtuoso’ performer was a relatively new one, exemplified by Paganini and the attention he drew to the violin as a virtuosic instrument. The piano was not far behind, however, and this reached its climax with the rivalry between Liszt and Thalberg – two stupendous pianists, the same age, whose performance at a benefit in Paris was tantamount to a piano duel. Some of Liszt’s most fiendish works feature on this release, including his Malédiction for piano and strings, and Totentanz, famed for its shockingly percussive piano effects. Thalberg is not forgotten, with his Piano Concerto Op. 5 showcasing the composer and pianist’s penchant for virtuosity, even if it was written in his teens.

The release is rounded off by Romantic composers from further afield; some of the finest American composers of the late 19th and early 20th centuries appear, including Daniel Mason – little known here but much admired during his lifetime – as well as Beach, Barber and Gershwin. Mason was a devotee of Brahms and fiercely opposed to modern developments in music, such as Impressionism. Amy Beach was more open to stylistic changes during her lifetime, while Barber – born in 1910 – loved to utilise the expressive tonality of the 19th century in his compositions, including in his 1962 Piano Concerto, on CD19 of this boxset.

Most of the recordings come from the rich and unique Vox catalogue, featuring such excellent pianists as Michael Ponti, Hans Kann, Martin Galling, Jerome Rose, Roland Keller and many more.