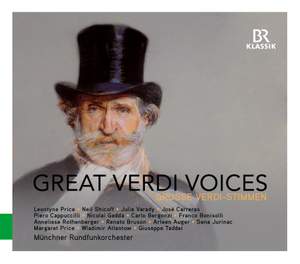 The radio recordings collected on the newly-released CD from BR-KLASSIK entitled Great Verdi Voices were made between 1962 and 1984. All impressively convey the vocal presence of the renowned performing artists and are thus also of historical significance: the recordings produced by the Bayerischer Rundfunk document the development of how Verdi's music was received in Germany during the two decades in question.

Many live recordings also offer interesting alternatives to their studio counterparts at that time by the same renowned performers. Their names read like a Who's Who of the most excellent Verdi interpretations: Arleen Auger, Sena Jurinac, Leontyne Price, Margaret Price, Anneliese Rothenberger and Julia Varady are the ladies presented here, and the gentlemen are Vladimir Atlantov, Carlo Bergonzi, Franco Bonisolli, Renato Bruson, Piero Cappuccilli, José Carreras, Nicolai Gedda, Neil Shicoff and Giuseppe Taddei.

The selection of arias and opera scenes ranges from Verdi's early operas Ernani, Macbeth and Il Corsaro (The Corsair) and middle operas Rigoletto, Il Trovatore (The Troubadour), La Traviata and Un ballo in maschera (A Masked Ball), to the later works: Don Carlo, Aida, Otello and Falstaff. The arias and scenes, arranged chronologically according to their dates of composition, are a representative cross-section of Verdi's operatic oeuvre. The Münchner Rundfunkorchester accompanies throughout, under various German and international conductors.

The first track immediately announces that this compilation means business. At the height of her powers, Leontyne Price launches into 'Ernani, involami' with energy, commanding authority, slightly sketchy coloratura, and voice to spare. If this is not a great Verdi voice, then none is...Conductors, orchestral standards and recording quality are variable. The voices, though, are all worth hearing.