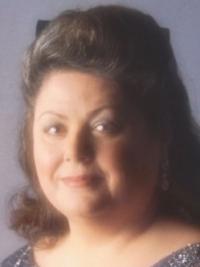 Margaret Price was born in Blackwood, Wales, in 1941: her original ambition was to become a biology teacher, and her decision to switch to a career in music was primarily fuelled by a desire to sing lieder rather than opera. Initially training as a mezzo, Price's big break came in 1963 when she stepped in for an ailing Teresa Berganza as Cherubino at Covent Garden: she is still remembered primarily as a Mozart (and Verdi) singer, though shortly after this auspicious Royal Opera debut she transitioned to the lyric soprano repertoire, numbering Donna Anna, Fiordiligi, Pamina and Konstanze among her signature-roles. Later in her career (which was largely based in Germany) she became an acclaimed Verdian, winning particular praise as Amelia Boccanegra, Aida, Elisabetta and in particular Desdemona (she remains the definitive interpreter of this role for many to this day). Limiting herself to a handful of roles which suited her statuesque physique and golden, soaring sound, she never ventured into Wagnerian repertoire on stage but was persuaded to sing Isolde on record for Kleiber: the disc is now widely considered to be one of the finest recordings of the work, as well as the crowning glory of Price's career. Price was awarded a CBE in 1982 and was made a Dame in 1993; she died at home in Ceibwr Bay on 28th January 2011.