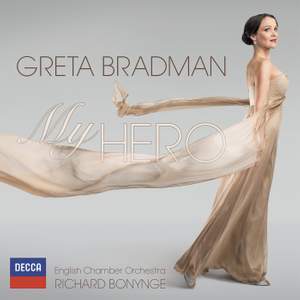 Bradman has it all – a richness and range of colour in the middle voice that puts many mezzos to shame, extreme high notes of extraordinary fullness, and the sparkling-clean coloratura that usually... — Katherine Cooper, Presto Music, 28th August 2015 More…

"I Dreamt I Dwelt in Marble Halls"

"Ah! bello a me ritorna"

Ned Washington: When You Wish Upon a Star

Katherine is blown away by Australian soprano Greta Bradman's debut recording on Decca: "My Hero".

‘True old-fashioned bel canto sound – the sort we only dream about today’ announced Richard Bonynge, internationally recognized as one of the greatest of opera conductors and connoisseurs of the voice, speaking of Greta Bradman. Bonynge chose Greta to sing the title role in a performance of Rodelinda in 2014 and the critics were lavish in their praise. ‘With a dark mezzo quality in her middle voice and an ability to float her voice when singing soft sustained notes and intricate coloratura passages, she was at times uncannily similar in vocal quality to Sutherland,’ wrote Classic Melbourne. On the strength of these performances, Bonynge invited Greta to record with him, and in May this year, the two collaborated on her first operatic recording to be released internationally on Decca – the label that is home to such great artists as Luciano Pavarotti, Renata Tebaldi, Cecilia Bartoli and Renée Fleming. Bonynge himself made well over a hundred records for Decca between 1962 and 1998, many with his late wife, Joan Sutherland. This album marks an auspicious return for the maestro to the label.

Bradman has it all – a richness and range of colour in the middle voice that puts many mezzos to shame, extreme high notes of extraordinary fullness, and the sparkling-clean coloratura that usually comes with voices a third of this size. It’s easy to see why Bonynge was transfixed, and why he was so keen to hear her in repertoire closely associated with his late wife Joan Sutherland.

The best moments of My Hero come from Handel’s Rodelinda — Bradman has performed the title role complete — and a luxurious assortment from operetta and musical theatre, tipping into cheesy but just short of the full fondue.