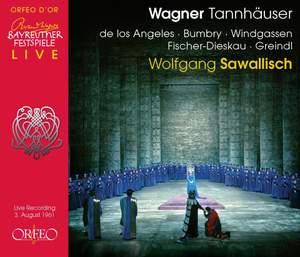 Orchesta of the Bayreuth Festival, Wolfgang...

Bumbry's über-sensuous Venus [is] a feline Carmen transported to the Horselborg...This performance is all the more treasurable because it is the first of de Los Angeles’s three Wagner roles…to... — International Record Review, December 2014 More…

The first performance of a series, they say, isn’t always the best. In 1961, as the critics noted, the opening night suffered not just from the usual first-night nerves, but also the common cold was doing the rounds. The discovery in radio archives of a 'Tannhäuser' from the next performance is thus a real find in historic nights at the Bayreuth Festival. Wieland Wagner's 1961 production, conducted by Wolfgang Sawallisch, saw Wolfgang Windgassen as the titular hero and, alongside him, Grace Bumbry in her international breakthrough role as the 'black Venus'. Victoria de los Angeles sang Elisabeth and Dietrich Fischer-Dieskau (at his last Bayreuth Festival) the role of Wolfram. By a stroke of luck, all the protagonists were on form on the evening of 3 August 1961, as we can now hear for the first time. Dietrich Fischer-Dieskau outdoes himself once again as Wolfram, and Grace Bumbry and Wolfgang Windgassen achieve a perfect balance of love’s lust and sorrow. Sometimes a second attempt is worth more than twice the trouble.

Bumbry's über-sensuous Venus [is] a feline Carmen transported to the Horselborg...This performance is all the more treasurable because it is the first of de Los Angeles’s three Wagner roles…to be made available in an ‘authorised’ recording ...There are few recorded Wolframs to match this [Fischer-Dieskau’s] performance...avid collectors will want it.

The sultry, sensuous side of her voice has always been one of Bumbry’s strongest assets, and that makes her a great shout for the goddess of love...Windgassen himself is on very fine form here...Fischer-Dieskau sounds great here, bringing all of his famous smoothness and characteristic importance of the words.

[de los Angeles's contributions] are the main interest here: she is heart-stopping in her pleas for the Thuringian court to forgive the errant antihero in Act II. It’s a rare example of this beloved singer in a complete Wagner role...Sawallisch presides over an orchestra and chorus in peak form. The mono sound can’t compare with Philips’s stereo, but is worth enduring for the angelic Elisabeth.

Sawallisch admirably negotiates the work’s at times deliberately blurred dividing line between spiritual and sexual experience, though he’s not as extreme as some interpreters – ironic given that the Wieland Wagner production from which this was taken was deemed pornographic at the time. The mono sound is warm and crystal clear.