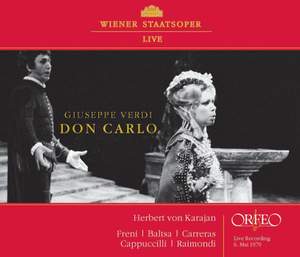 Karajan galvanises the orchestra, the singers sound as if they are listening to one another and there are some beautifully floated soft phrases...[Raimondi] does the king's loneliness very well.... — Gramophone Magazine, June 2014 More…

In this live recording from May 1979 we can now hear Karajan’s 'Don Carlo' with an absolute dream team, in the four-act version that he preferred. He had his ideal ensemble of singers at his disposal in Vienna: Mirella Freni as Elisabetta had already played a major part in this production’s success in Salzburg. She repeated her triumph in Vienna, offering Verdi singing with a faultless line and just the right flexibility between lyrical and dramatic expression. José Carreras sang the title role of Elisabetta’s unlucky lover. His brilliant timbre and introvert expression were perfectly suited to his character, so full of hope and yet so hopelessly dependent on himself alone. His only friend Posa was sung by the leading Italian baritone of the day, Piero Cappuccilli. Like Freni, he too was regarded as without peer in his role, and with good reason.

Agnes Baltsa gave her debut as Eboli, and her mezzosoprano voice possessed both the lightness of touch necessary for her 'Veil Song' but also the power needed for 'O Don fatale'. Matti Salminen as the Grand Inquisitor was at an early highpoint in his career, who would remain at the peak of his profession for many years to come.

Karajan galvanises the orchestra, the singers sound as if they are listening to one another and there are some beautifully floated soft phrases...[Raimondi] does the king's loneliness very well. [Cappuccilli] brings generous tone and exemplary breath control...while Carreras is absolutely thrilling when Carlos confronts his father.

For the palpable excitement generated by the performance, and for a fairer balance between voices and orchestra, this recording stands as a finer document of the conductor’s association with the opera than his studio account