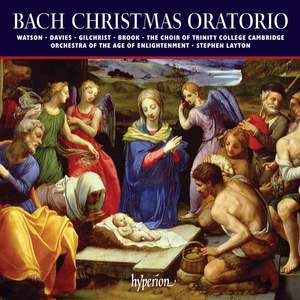 Layton unwraps it with all due festive pomp and circumstance...In a work incontestably smitten with the alto voice, Iestyn Davies triumphs...Gilchrist's relaxed and lyrical Evangelist maintains... — BBC Music Magazine, Christmas Issue 2013, 4 out of 5 stars More…

Part 6 No 10. Recitative. Was will der Höllen Schrecken nun

Stephen Layton and the combined forces of Trinity College Choir Cambridge, the Orchestra of the Age of Enlightenment and an impressive line-up of soloists present a joyous rendition of Bach’s Christmas Oratorio. This six-part masterpiece covers the events of the nativity to Epiphany and beautifully evokes the pastoral atmosphere of the Gospels which is such an important part of the Christmas liturgy.

James Gilchrist has become one of the most admired Evangelists performing today, his limpid, flexible tone and great musicianship bringing the stories thrillingly to life.

Layton unwraps it with all due festive pomp and circumstance...In a work incontestably smitten with the alto voice, Iestyn Davies triumphs...Gilchrist's relaxed and lyrical Evangelist maintains the narrative flow...Crisp choral singing and exquisite accompaniment, this is a decidedly welcome addition to anyone's Christmas stocking.

the playing of the OAE brings great distinction to this recording...Right from the opening chorus of Cantata I one notes clarity and vigour in [the choir's] singing...Gilchrist is an admirable choice as the Evangelist...I found his narration beautifully nuanced, sensitive and characterful...This stylish and committed performance is one that renews again one’s awe at the genius of Bach.

There’s a real sense of jubilation right from the opening chorus; the young mixed-voice choir sing with verve and immaculately crisp diction, and the chorales are phrased with tender loving care...The soloists are also top-drawer...Davies’s limpid alto arias are simply some of the finest accounts on disc.

Layton and his orchestral players begin with tremendous verve, but there is infinite variety in this seasoned Bach conductor’s trajectory of the six cantatas with the lively, mixed-voice Trinity choir — singing in excellent German — and elite British soloists...Gilchrist’s Evangelist here could hardly be bettered among his compatriots, incisively declaimed and subtly nuanced.

The fact that the music seems to course through the very veins of the singers and players, not to mention Layton himself, is one of the qualities that make this Christmas Oratorio such a telling, affecting and inspiring experience, judiciously balancing jubilation, devotion and contemplation.

An enthralling disc...I was most impressed with the soloists, particularly James Gilchrist’s eloquent Evangelist and Matthew Brook’s resonant bass, and by some brilliant playing from the OAE – their exultant trumpets and timpani open and close the oratorio in a blaze of festive jubilation.