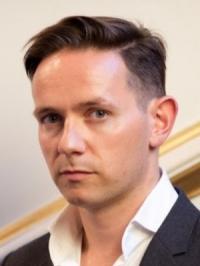 Born in 1979 into a musical family (his father was cellist with the Fitzwilliam Quartet), Davies sang as a boy chorister at St. John’s College Cambridge, and went on to read Archaeology & Anthropology there before studying at the Royal Academy of Music.

Davies has appeared regularly at houses including La Scala, the Metropolitan Opera, the Royal Opera House Covent Garden and Glyndebourne; he is widely acclaimed in roles including Handel’s Rinaldo, Orlando, and Bertarido (Rodelinda), Oberon in Britten’s A Midsummer Night’s Dream and Apollo in his Death in Venice and also contemporary assignments such as The Boy in George Benjamin’s Written on Skin and Francesco de Avila in Thomas Adès’s The Exterminating Angel as well as in mainstream oratorio, especially Bach and Handel (his discography includes recordings of Messiah and Bach’s St. John Passion, Mass in B minor and Christmas Oratorio for Stephen Layton). Davies received the Royal Philharmonic Society’s Young Artist Award in 2010 and was awarded an MBE in 2017; prizes for specific recordings include Gramophone Awards for Arias for Guadagni in 2012, Arise, my Muse in 2014 (recorded during his residency at Wigmore Hall two years earlier), and an album of Bach cantatas in 2017.

Find out more at https://en.wikipedia.org/wiki/Iestyn_Davies

Recording of the Week,  Handel's Rodelinda from Harry Bicket and The English Concert

Social distancing is no barrier to superb ensemble-playing on this terrific new recording of Handel's 1725 opera, with Lucy Crowe in the title-role and Iestyn Davies as her estranged husband Bertarido.

The countertenor talks to David about his new album with Fretwork, playing off the juxtaposition of baroque works by Henry Purcell with works by contemporary composer Michael Nyman.