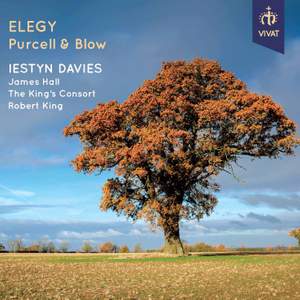 Davies is the headline artist on the cover; but in fact he duets with James Hall on notably equal terms, the two voices subtly differing in timbre but compatible in articulation and expressivity.... — BBC Music Magazine, December 2019, 5 out of 5 stars (Performance ) / 4 out of 5 stars (Recording) More…

Purcell: Chaconne (Two in One Upon a Ground) (from Dioclesian, Z. 627)

Purcell: Since the Toils and the Hazards of War (from Dioclesian, Z. 627)

Blow: No, Lesbia, no, you ask in vain

Blow: Ode on the Death of Mr Henry Purcell

No. 1, Mark How the Lark and Linnet Sing

No. 3, So Ceas'd the Rival Crew When Purcell Came

No. 4, We Beg Not Hell, Our Orpheus to Restore

No. 5, The Pow'r of Harmony Too Well They Knew

No. 6, The Heav'nly Quire, Who Heard His Notes from High

No. 7, Ye Brethren of the Lyre, and Tuneful Voice

The young British countertenor talks to Katherine about his career to date and his recent album of duets by Purcell and Blow with Iestyn Davies and The King's Consort.

 World-renowned countertenor Iestyn Davies, partnered by outstanding young countertenor James Hall and The King’s Consort, turns his attention to the music of Henry Purcell and his colleague John Blow.

 This beautifully themed programme of solos and duets centres on elegies, and concludes with Blow’s magnificent ‘Ode on the death of Purcell’. Rarely heard together on one recording are a set of three substantial elegies composed by Purcell and Blow to commemorate the untimely death of the much-loved Queen Mary. Two of these ingeniously take the same text, one in English (by Blow – a particularly fine work), the other in Latin (Purcell). Another highlight is Iestyn’s seraphic rendition of the melancholy masterpiece, ‘O solitude’. Around these come duets both famous and less familiar, including ‘Hark how the songsters’, Blow’s ravishing ‘Ah, heav’n, what is’t I hear?’, the deliciously languid ‘In vain the am’rous flute’ and, of course, ‘Sound the trumpet’.

 The death of Queen Mary, which spurred London’s two leading composers into doleful elegiac action, was soon to be followed by a greater musical calamity: the loss of Henry Purcell. John Blow’s outstanding ‘Ode on the death of Mr Henry Purcell’ is not only a heartfelt tribute to his colleague, but one of the most outstanding English works of the era.

 Iestyn Davies shows himself to be a true master of this repertoire, beautifully partnered by James Hall and by an ensemble which has dominated the world of Purcell recordings for more than thirty years.

Davies is the headline artist on the cover; but in fact he duets with James Hall on notably equal terms, the two voices subtly differing in timbre but compatible in articulation and expressivity. The signers are backed by a similarly well-matched pair of recorders and a supportive continuo section with an imaginatively changing choice of instruments.

Absolutely on point: with two wonderfully matched countertenors and superb recorder-playing, bound together in the intimate acoustic of Alpheton New Maltings, Suffolk…The big draw is, of course, countertenor Iestyn Davies, and for me his performance of Purcell’s ‘O solitude’ is a clear standout…This is surely one of the best countertenor performances on disc…This whole disc is a trove of bittersweet delights.

They duet ravishingly in Purcell’s Hark! How the songsters and Sound the Trumpet, and in less familiar pieces by Blow, whose Ode on the Death of Mr Henry Purcell is the album’s moving climax.

Worthy successors to James Bowman and Michael Chance, who also recorded these duets with the King’s Consort, Davies and Hall bring a chamber-music intensity to Blow’s sublime elegy on Purcell’s death, though nothing on the disc quite beats the spine-tingling last bars of Purcell’s duet O dive custos.