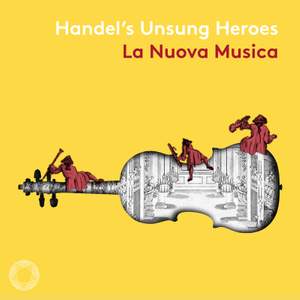 This is a stunning collection of Handel opera numbers. For originality, risk-taking and erudition, it towers above its predecessors. It also benefits from its mix of soloists – having chosen... — BBC Music Magazine, Christmas 2021, 5 out of 5 stars More…

The Artistic Director of La Nuova Musica talks about his new album of Handel arias, shining the spotlight not just on the vocalists but on the instrumentalists whose obbligato lines enhance the music.

After their acclaimed recording of Gluck’s Orfeo ed Euridice, La Nuova Musica and David Bates expand their PENTATONE discography with Handel’s Unsung Heroes, in which the instrumentalists of Handel’s operas are put centre stage. Traditionally restricted to an “invisible” existence in the orchestra pit, La Nuova Musica’s obbligato instrumentalists – violinist Thomas Gould, oboist Leo Duarte and bassoonist Joe Qiu – are now in the limelight. They will stand as equal partners alongside a world-class line up of soloists – soprano Lucy Crowe, mezzo-soprano Christine Rice and countertenor Iestyn Davies – showing how Handel wrote music as virtuosic and lyrical for his unsung heroes as for their singing counterparts. The album includes arias from Handel masterpieces such as Rinaldo, Giulio Cesare, Agrippina and Ariodante.

La Nuova Musica and its artistic director David Bates are among the most exciting Baroque ensembles of today. Their PENTATONE debut with Gluck’s Orfeo ed Euridice was both BBC Music Magazine Choice and Gramophone Editor’s Choice in December 2019. Iestyn Davies returns to PENTATONE after having sung the title role in that same release, whereas Lucy Crowe and Christine Rice make their PENTATONE debut.

This is a stunning collection of Handel opera numbers. For originality, risk-taking and erudition, it towers above its predecessors. It also benefits from its mix of soloists – having chosen the music for its expressive licence, David Bates brings together world-class vocal and instrumental virtuosos to perform it.This project is a heroic achievement for all involved.

Virtually every number is a Handelian winner, the performances could hardly be bettered, and Pentatone’s presentation, including apt contemporary quotes and illuminating notes from Ruth Smith and Bates himself, is a model of its kind.

It's a joy to hear members of La Nuova Musica's crack team of players stepping into the spotlight with such flair and synergy with their respective singers in this programme of opera arias with obbligato instruments: I love the hint of good-natured one-upmanship between violinist Thomas Gould and Iestyn Davies in the avian cadenzas of Cesare's Se in fiorito ameno prato.

All [instrumentalists] deserve their star billing, pitted against three admired Handel singers. Davies’s boyish alto is better suited to Caesar’s musing about the beauty of nature than to Rinaldo’s martial bravura, Crowe is a rich-voiced Agrippina and Cleopatra, and Rice is heroic in arias written for the castrato, Carestini.