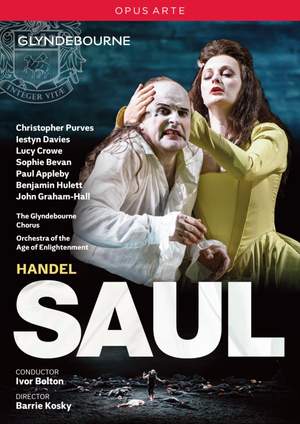 The Glyndebourne Chorus & Orchestra of the Age of Enlightenment, Ivor Bolton (conductor) & Barrie...

Glyndebourne’s Saul stole the summer and had critics raving. The Guardian (****) applauded ‘virtuoso stagecraft’ from director Barrie Kosky in his debut production there, calling the show ‘a theatrical and musical feast of energetic choruses, surreal choreography and gorgeous singing’. For The Independent, which ranked it amongst five top classical and opera performances of 2015, there was ‘no praise too high’ for the cast. The Orchestra of the Age of Enlightenment under Ivor Bolton sparkles from the pit with period panache, and designer Katrin Lea Tag’s ‘exuberant costumes’ (The Times ****) set the Old Testament story in Handel’s time, with a witty twinge of the contemporary.

Extra Features: A Descent Into Madness and a Cast Gallery.

Pivotal is Christopher Purves’s Saul – surely the father-in-law from hell should the Goliath-slaying David choose his daughter Michal (or son Jonathan – tenderly sung by Paul Appleby). Purves has always done rage and menace to the manner born, but his slide into ever-deepening madness is terrifying…his is a tour de force to rival the diametrically opposed inscrutable calm that is Iestyn Davies’s David…taut musical direction from Ivor Bolton consolidates a Glyndebourne bullseye

A recording that picks up just about as much glamour and nuance as is it is possible to convey using the comparatively limited focus of cameras.

Christopher Purves is utterly consumed by his role as Saul...Iestyn Davies is vocally outstanding as David, with his customary melting melismas.