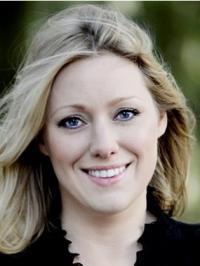 Sophie Bevan was born in Somerset in 1983, the eldest child of a large musical family (her slightly younger sister Mary is also an internationally-acclaimed soprano); she studied at the Benjamin Britten International Opera School under Lilian Watson, and shortly afterwards became a Harewood Artist at English National Opera, where roles included Susanna in The Marriage of Figaro, Despina in Così fan tutte, Yum-Yum in The Mikado, Télaïre in Rameau’s Castor and Pollux, and Sophie in Der Rosenkavalier. (She would go on to sing the latter role opposite Renée Fleming at Covent Garden, where her roles have also included Pamina in Die Zauberflöte, The Wood-Bird in Siegfried, Ilia in Idomeneo and Antigone in Enescu’s Oedipe).

She has also created several major roles in contemporary opera, including in Beatriz in Thomas Adès’s The Exterminating Angel and Hermione in Ryan Wigglesworth’s The Winter’s Tale (both premiered in 2017). Bevan’s discography includes Perfido! (a collection of concert-arias by Mozart, Haydn and Beethoven on Signum, which was nominated for an International Opera Award), Songs of Vain Glory (recorded at Wigmore Hall in 2014 to mark the centenary of the outbreak of World War One), and Handel’s The Triumph of Time and Truth on Delphian, in which she sings Beauty to her sister Mary’s Deceit.

Prizes and honours include the Queen Mother Rose Bowl whilst still a student at the Royal College of Music, the UK Critics’ Circle Award for Exceptional Young Talent in 2010, and the Young Singer Award at the 2013 International Opera Awards.

Find out more at https://en.wikipedia.org/wiki/Sophie_Bevan