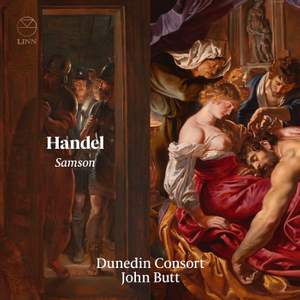 Butt has created the best Samson ever...These choral forces make for a vibrancy unique among Samson recordings…Butt’s deep grasp of both Handel’s rhetoric and of large-scale structure turns the... — BBC Music Magazine, 5 out of 5 stars More…

I. This Day, a Solemn Feast (Recitative)

VI. Then Free from Sorrow (Air)

VIII. Why by an Angel (Recitative)

I. Oh, Change Beyond Report (Recitative)

III. Whom Have I to Complain of but Myself (Recitative)

V. Since Light so Necessary Is to Life (Accompagnato)

I. Brethren and Men of Dan (Recitative)

IV. God of Our Fathers (Air)

V. The Good We Wish for (Accompagnato)

VIII. My Griefs for This (Accompagnato)

IX. Why Does the God of Israel Sleep? (Air)

X. There Lies Our Hope! (Recitative)

XI. Then Shall They Know (Chorus)

XIV. Then Long Eternity Shall Greet Your Bliss (Arioso)

XV. Joys That Are Pure (Air)

XVI. Then Round About the Starry Throne (Chorus)

I. Despair Not Thus! (Recitative)

II. Just Are the Ways of God to Man (Air)

III. My Evils Hopeless Are! (Recitative)

I. But Who Is This (Recitative)

IV. Your Charms to Ruin Led the Way (Air)

VI. My Faith and Truth (Duet)

VII. Her Faith and Truth (Chorus)

IX. Her Faith and Truth (Chorus)

X. Ne’er Think of That! (Recitative)

III. Favour’d of Heav’n Is He (Recitative)

I. No Words of Peace (Recitative)

II. Honour and Arms Scorn Such a Foe (Air)

III. Put on Your Arms (Recitative)

IV. My Strength Is from the Living God (Air)

X. To Song and Dance We Give the Day (Air)

XI. To Song and Dance We Give the Day (Chorus)

XII. Fix’d in His Everlasting Seat (Chorus and Soli)

I. More Trouble Is Behind (Recitative)

V. Be of Good Courage (Recitative)

VI. Then Shall I Make Jehovah’s Glory Known! (Accompagnato)

VIII. With Might Endued Above the Sons of Men (Accompagnato)

IX. The Holy One of Israel (Air and Chorus)

II. Great Dagon Has Subdu’d Our Foe (Air and Chorus)

III. What Noise of Joy Was That? (Recitative)

V. Your Hopes of His Deliv’ry (Recitative)

I. Heav’n! What Noise! (Recitative)

III. Noise Call You This? (Recitative)

I. Where Shall I Run (Recitative)

III. Proceed We Hence to Find His Body (Recitative)

• For the first time listeners can enjoy an authentic Handelian chorus, comprising both solo sopranos and boy trebles – a sonority largely unheard in the modern age.

• The singers available to Handel for the work’s first set of performances in 1743 varied considerably, leading many researchers to speculate upon the composer’s own preferences.

• But new thinking by director John Butt has led to the evolution of this recording and to what he considers to be the definitive performance in line with Handel’s intentions.

• Matching the revelatory historical practice begun in its award-winning recording of Messiah (Dublin Version, 1742), the soloists lead their sections to unite the solo and choral forces, creating a highly effective and cohesive sound.

• With rich orchestration and highlights such as ‘Let the bright seraphim’ and ‘Total eclipse’, Samson is Dunedin Consort’s most ambitious undertaking to date.

Butt has created the best Samson ever...These choral forces make for a vibrancy unique among Samson recordings…Butt’s deep grasp of both Handel’s rhetoric and of large-scale structure turns the work’s patchwork quality into a virtue, bringing intimacy to each character’s reflections and urgency to crowd reactions.

As one would expect of conductor and academic John Butt, the recording breaks new ground. Butt gives us Handel’s first performed, and slightly longer, version of the work from 1743. He also has new ideas to present on the choruses...More importantly, the performance is unfailingly wide-ranging in its response to this epic oratorio.

This new Samson now becomes the top recommendation: for its uniformly excellent soloists, its excitingly ‘present’ choral singing and, above all, its more urgent sense of theatre…Sophie and Mary Bevan, both natural Handelian stylists, are well-nigh ideal… Jess Dandy, a true contralto, is the oratorio’s voice of balm, singing the sublime prayer ‘Return, O God of hosts’ with warm, even tone and broad phrasing.

Butt directs with vigour: Joshua Ellicott could hardly be a more different Samson from the stentorian Jon Vickers of yesteryear, light and eloquent; Sophie Bevan is a sensual Delilah, while Dunedin regulars excel.

Brisk speeds and agile accompaniments make this performance fly by. Joshua Ellicott’s Samson is an appealingly sympathetic character, delivering an eloquent “Total eclipse” in Act 1, Sophie Bevan's Dalila equally charismatic. There's fun alongside the drama too: sample the chorus of warring Israelites and Philistines which closes Act 2. Handsomely produced, with outstanding notes and glowing sound, this is a treat.

With the Consort’s best instrumentalists in place and Linn’s Philip Hobbs producing, this is an immaculate, and hugely important, recording. More prizes assuredly await.