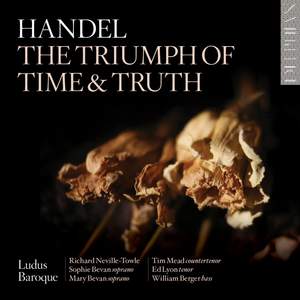 Handel: The Triumph of Time and Truth

Handel: The Triumph of Time and Truth

Act I: Time is supreme (Chorus)

Act I: Recitative: How happy could I linger here (Beauty)

Act I: Recitative: Fear not! I, Pleasure, swear (Pleasure, Beauty)

Act I: Recitative: Our pow'rs we all will try (Pleasure, Beauty, Time, Counsel)

Act I: Recitative: The hand of Time pulls down (Time)

Act I: Recitative: Too rigid the reproof you give (Deceit)

Act I: Air: Happy, if still they reign in pleasure (Deceit, Chorus)

Act I: Recitative: Youth is not rich in Time (Counsel, Time, Pleasure)

Act I: Air: Like the shadow, life ever is flying (Time, Chorus)

Act II: Recitative: You hoped to call in vain (Time)

Act II: Recitative: Too long deluded you have been ( Counsel, Time)

Act II: Recitative: What is the present hour? (Time, Beauty)

Act II: Ere to dust is changed thy beauty (Chorus)

Act III: Recitative: Regard her not (Counsel, Beauty)

Act III: Air: From the heart that feels my warning (Time)

Act III: Recitative: Pleasure, too long associates we have been (Beauty, Pleasure)

In their third disc for Delphian, Ludus Baroque and five stellar soloists bring to life Handel’s rarely heard final oratorio, a remarkable Protestant re-casting of a work written 50 years earlier to a text by the young composer’s Roman patron Cardinal Pamphili. Compelled by Time and Truth to accept the divine order of change and decay, Beauty ultimately gives way – as with the aging composer himself – to an assertion of redemption by good works, reflected in the incorporation of choruses Handel had written for the Foundling Hospital.

The resulting work, neglected by centuries of scholarship on account of its hybrid origins, here proves an extraordinary feast of riches, and the ideal vehicle for Richard Neville-Towle’s carefully assembled cast of exceptional soloists, vigorous, intelligent chorus and an orchestra made up from some of the UK’s leading period instrumentalists. Formed in 1998 under the direction of Richard Neville-Towle, this ‘crack group of British early musickers’ (The New York Times) prides itself on the exuberance and energy of its performances, specialising in great works of the early music repertoire. With sisters Mary and Sophie Bevan (the latter having just been shortlisted for an RPS award) jousting with one another in the roles of Deceit and Beauty, these discs make for revelatory listening.

Both Bevans sing with lustrous tone, natural agility and exquisite decorations, Lyon and William Berger (Time) with taut elegance and Tim Mead (Counsel) with immaculate poise. Though Neville-Towle's tempos sometimes waver, this is a performance of great warmth.

The small orchestra playing is stylish and characterful...Excellent, spirited singing from both choir and soloists throughout – Ludus Baroque's most valuable Handel recording so far confirms that this unclassifiable, peculiar work is well worth revisiting.

Keep an eye on this Ludus/Delphian partnership.

Ludus Baroque under Richard Neville-Towle gives a fine account of the Overture … The singers taking the solo parts are excellent and the balance superb...There is so much first class music to be heard in this rarely-performed oratorio.

finely shaped, unflamboyant conducting from Neville-Towle, gracious playing and some very fine singing. Sophie Bevan plays Beauty in what is arguably her finest recording to date. Her sister Mary as Deceit sounds at once seductive and cunning, while Ed Lyon is all elegant bravado and swagger as Pleasure.

the music of The Triumph of Time and Truth, Handel’s last oratorio before he died in 1759, is of such strength, freshness and radiance – notably so in this buoyant, scrupulously characterised performance by the early-music group Ludus Baroque and a glorious line-up of soloists.

A delight from start to finish. Instrumental contributions are crisp and stylish, the young cast are excellent (especially scene-stealers Mary and Sophie Bevan), and the production comes across with energy and panache.