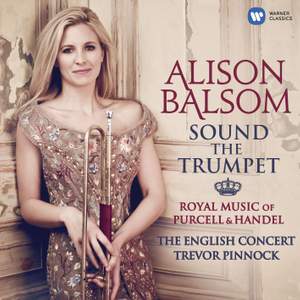 Royal Music of Purcell and Handel

This charming disc contains some of the most imaginative and polished trumpet playing you're ever likely to hear...Born-again authenticists may cavil at Balsom's vented trumpet, a modern development... — BBC Music Magazine, January 2013, 5 out of 5 stars More…

Purcell: Suite from the Fairy Queen

The Fairy Queen, Z. 629 - Suite of Musicks and Dances: Symphony

The Fairy Queen, Z. 629 - Suite of Musicks and Dances, Act 5: Chaconne and Chorus

Oboe Concerto No. 1 in B-Flat Major: I. Adagio

Recording of the Week,  Alison Balsom: Sound The Trumpet

In her first solo album to be performed exclusively on the natural trumpet, Balsom joins The English Concert and Trevor Pinnock for a programme of music celebrating real or mythic monarchs by Handel and Purcell, including excerpts from The Fairy Queen, King Arthur and Ode for the Birthday of Queen Anne.

In the year of Queen Elizabeth II’s Diamond Jubilee, Alison Balsom celebrates the heroic era of the Baroque trumpet in works by George Frideric Handel (1685-1759) and Henry Purcell (1658 or 1659-1695), whose anthems, odes, sinfonias and operas have provided the music for numerous royal celebrations from their own day to the present.

Joining forces with Trevor Pinnock, harpsichordist, conductor and pioneer of historical performance, and with the English Concert orchestra that he founded, Balsom demonstrates the versatility and expressive power of her valve-less instrument in original works and new arrangements. These include Purcell’s Sound the trumpet and Handel’s Eternal Source of light divine in duet with countertenor Iestyn Davies and Purcell’s The Plaint from The Fairy Queen in duet with soprano Lucy Crowe. Further repertoire includes suites from Purcell’s semi-operas King Arthur (1691) and The Fairy Queen (1692) in new arrangements by Balsom and Pinnock, Handel’s Water Piece in D Major HWV 341 and his Oboe Concerto No. 1 in B-flat Major HWV 301 transposed into C Major.

Alison Balsom is one of today’s most popular classical musicians. Having managed to break through to the mainstream without abandoning her musical integrity, she continues to draw ever-wider audiences for her performances and recordings of diverse repertoire.

This charming disc contains some of the most imaginative and polished trumpet playing you're ever likely to hear...Born-again authenticists may cavil at Balsom's vented trumpet, a modern development aiding intonation. But her flexible tuning, scrupulously focused to blend with the harmony, is a relief from the compromised tuning needed to play certain notes on true 18th-century instruments.

when the instrument is played as fluidly agreeably as it is here, nobody could doubt that it is the right tool for the job...And it all works. This is rattling good music, and so easily does the trumpet fit into it that often it is hard to recall what the original scorings were anyway. Balsom, too, sounds utterly at home...and [is] wonderfully backed by the English Concert and the bright natural musicianship of Trevor Pinnock

Up at the top of her range, or down below, fast or slow, she is in superb control and form...the lightness of the string accompaniments, the calm attention to springy rhythms, the unobtrusive sensitivity of the phrasing, all done without exaggerated emphasis or anachronistic flamboyance, are a sheer delight...[Pinnock] is surely a national treasure

the music-making is a joy from beginning to end. Alison Balsom’s playing is stunning. The tone and intonation are fabulous; the lip trills, ornaments and runs simply staggering. How she achieves this level of technical assurance on an instrument without valves is remarkable...Crowe’s rendition of The Plaint from Purcell’s The Fairy Queen is sensitively and beautifully sung and it’s obvious that there’s an equal musical partnership captured here

the easy rapport between soloist and band is evident from every bar of every work...One of the great pleasures of this disc is the seamless and apparently effortless blend of trumpet and each voice: Alison colours her timbre to take on almost crumhorn-ish tones when duetting with Crowe, whilst there’s plenty of ‘front’ and metal in the sound when she joins Davies for the more vigorous Purcell.

For historical accuracy, she plays the valve-less “natural” trumpet: it really does appear to offer a more direct access to the human voice, a quality confirmed when she duets with countertenor Iestyn Davies

The music is glorious; so is Balsom’s artistry as she weaves a flawless path alongside Trevor Pinnock’s English Concert

One of the disc’s chief merits is the skill with which Balsom demonstrates the versatility of natural trumpets, reminding us that they are capable of a wide range of colours.

Her distinctive tone remains clearly recognisable, despite the instrument's limitations. The timbre is sweeter, less aggressively strident than that of the modern trumpet, and she’s paired with Trevor Pinnock and the English Concert, providing crisp, bouncy support.

Presto Classical talks to Alison Balsom about her new disc of Handel and Purcell, 'Sound the Trumpet' on EMI Classics