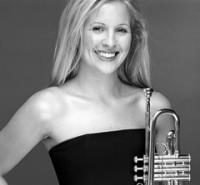 Born in Hertfordshire in 1978, Balsom studied at the Guildhall and in Glasgow and Paris before becoming a BBC New Generation Artist and signing with EMI Classics in 2002. She has recorded most of the core repertoire for her instrument, including the Hummel, Haydn and Arutiunian concertos, as well as working on and recording numerous transcriptions for trumpet and taking part in multi-media projects such as the Globe Theatre's 'Gabriel' - 'a teeming world of intersecting narratives' depicting Restoration London. Her many awards include a PPL Classical Award, two 'Female Artist of the Year' awards at the Classical Brits and the 2013 Gramophone Award for 'Artist of the Year'.

Balsom performs primarily on a modern instrument, though her recent 'Sound the Trumpet' album uses a natural trumpet throughout.

Find out more at https://en.wikipedia.org/wiki/Alison_Balsom

Katherine talks to the trumpet-player about her first recital disc with piano, out now on Warner Classics.