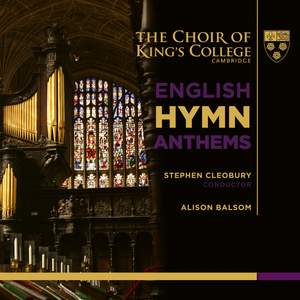 The King's performance [of the Parry] is predictably idiomatic, if a touch carefully preened and respectful...[Ireland's] is a more explicitly dramatic setting, and the singers seem to relish... — BBC Music Magazine, Awards Issue 2015, 4 out of 5 stars More…

Whitlock, P: Jesu, grant me this I pray

William H Harris: O What Their Joy and Their Glory Must Be

The first release of 2015 from the Choir of King’s College, Cambridge presents the choir singing anthems based on hymn tunes from the Anglican choral tradition.

'English Hymn Anthems' continues the choir’s active commitment to expanding the popular understanding of choral repertoire through original research and recording. Highlights include Parry’s epic' Hear my words, ye people' and 'Lord, Thou has been our refuge' by Vaughan Williams, featuring the trumpeter Alison Balsom. It provides at once a survey of traditional services at King’s College Chapel and a window into the little-known form of the hymn-anthem. The album joins the label’s other critically-acclaimed recordings including the chart-topping 'Favourite Carols from King’s', debut release 'Nine Lessons and Carols', which reached number 2 in the UK Specialist Classical Chart, 'Mozart Requiem Realisations', and the celebrated Fauré 'Requiem' which received Recording of the Month from BBC Music Magazine, number 4 on Classic FM’s Albums of 2014 and an IRR Outstanding from International Record Review. The album’s release will be accompanied by an extensive international press and marketing campaign. At the end of March 2015, the choir will embark on a tour of the United States, performing a repertoire of sacred choral music including repertoire from this album.

King’s College Choir owes its existence to King Henry VI, who envisaged the daily singing of services in his magnificent chapel; the 16 choristers are educated at King’s College School, whilst the 14 choral scholars and two organ scholars study a variety of subjects in the College. This remains the Choir’s raison d’être, but its worldwide fame and reputation, enhanced by its many recordings and broadcasts, has led to high-profile performances around the world. The highlight of the choral year is the worldwide live radio broadcast of the renowned Festival of Nine Lessons and Carols and the television broadcasts of Carols from King’s and Easter from King’s.

The King's performance [of the Parry] is predictably idiomatic, if a touch carefully preened and respectful...[Ireland's] is a more explicitly dramatic setting, and the singers seem to relish this...Parker Ramsay's organ accompaniment is a model of intelligent supportiveness.

The airy acoustic of the chapel coupled with the fine Harrison & Harrison (mostly) organ help to define a peculiarly and uniquely English sound, especially suited to the repertoire on this fine disc...this is King's playing to its considerable strengths at all levels