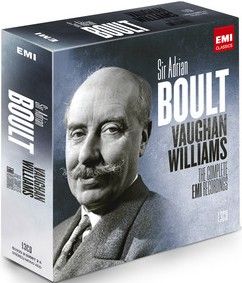 It seems superfluous to recommend this box. It contains around 17 hours of Boult’s VW. Many of these recordings are amongst the very best you will hear. Above it, the box offers a concentrated... — MusicWeb International, 17th June 2013 More…

Vaughan Williams: A Song of Thanksgiving

Sir Adrian Boult was born on 8th April 1889 in Chester and died on 22nd February 1983 in London and hence 2013 marks the 30th anniversary of his death. He was attending concerts first in Liverpool, primarily with Hans Richter, and then in London, whilst a pupil at Westminster School, with Sir Henry Wood, Claude Debussy, Arthur Nikisch and Richard Strauss. He met Elgar for whose music he was to do so much during his life as was another composer he befriended whilst at Christ Church, Oxford, before graduating in 1912, Ralph Vaughan Williams.

He spent a year studying in Leipzig where Arthur Nikisch had the greatest influence on him. He gained experience conducting for both the Royal Opera House, where he assisted in the first production there of Wagner’s Parsifal , and Serge Diaghilev’s ballet company. He was appointed conductor of the City of Birmingham Orchestra in 1924 and six years later the BBC made him director of music where he established the BBC Symphony Orchestra and became its chief conductor. During these years he introduced works by Bartók, Stravinsky and the Second Viennese School composers – Schönberg, Webern and Berg including his opera Wozzeck.

Forced to leave the BBC when he reached their retirement age, he became chief conductor of the LPO retiring in 1957. He became a champion of British music, giving numerous performances of Bliss, Britten, Delius, Tippett, Walton and Holst, whose Planets he had premiered, and the aforementioned Elgar and Vaughan Williams. This set brings together all the recordings he made of the latter starting in 1940 to the early 1950’s.

There was a pause until 1967 when he started to commit this set’s stereo recordings to disc ending in 1975. He continued to give concerts and record for a further three years until retiring just before reaching the age of 90.

It seems superfluous to recommend this box. It contains around 17 hours of Boult’s VW. Many of these recordings are amongst the very best you will hear. Above it, the box offers a concentrated focus on one of the composer’s most devoted exponents, a man who premiered three of the symphonies, and who remained an artistic partner par excellence.

The symphonies are the bedrock of the set; this was Boult's second complete cycle on disc, and the benefits of his career-long immersion in these scores is audible...Boult gives [The Pilgrim's Progress] remarkable breadth and transcendence. His account of Job is also extraordinary, as are the performances of the Tallis Fantasia, the 16-voice version of the Serenade to Music and In the Fen Country; the list could go on and on.