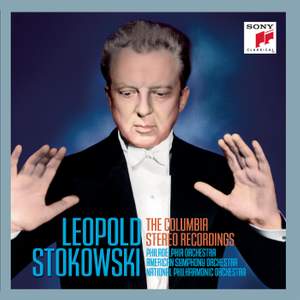 The sound has all of the Stokowski richness and body. The Bach, in particular, is fantastic with amazing solos from Kincaid and Brusilow. Stokowski recorded the de Falla several times and this... — Classical Net, 2013 More…

X. Canción del fuego fatuo (Song of the Will o' the Wisp)

Wir glauben all' an einen Gott

They are there! (A War Song March) - Première Recording

Election (It Strikes Me That) - Première Recording

In 1960, CBS recorded two LPs as souvenirs of Leopold Stokowski’s return to the Philadelphia Orchestra after an absence of nearly two decades. This included Falla’s El amor brujo, which he had introduced to America in 1922, and one of his celebrated “Symphonic Syntheses” of music from Wagner’s operas. In the original Gramophone review Edward Greenfield wrote: “Never before on disc have I heard a performance of the vividly atmospheric Falla ballet anything like as involving as this …” In the second of his “Philadelphia return” concerts of 1960, Stokowski played three of his famous Bach Transcriptions. He began orchestrating Bach’s organ works in the 1920s, bringing his keyboard music to a wider concert hall audience. His early Philadelphia Orchestra 78s of these arrangements were best-sellers in their day.

Glenn Gould was a great admirer of Stokowski, citing him as a significant influence in his teenage years. He wrote articles about the Maestro and interviewed him for Canadian radio, so it was not surprising that they should get together for a concerto recording. Biographies of Glenn Gould invariably refer to his “eccentricities” as well as his talent, so his collaboration with Stokowski, whose own musical career also had its controversial aspects, inevitably provided posterity with one of the more idiosyncratic readings of Beethoven’s “Emperor” Concerto.

When Stokowski gave the World Premiere of Ives’s Fourth Symphony in 1965, he pronounced it one of the most difficult works he had ever conducted. In the New York Times, Harold C. Schonberg wrote that the music “throws up spiky walls of sound, the simplest of songs, wild poly-rhythms, clumps of tonalities, and suddenly the quiet of a New England church.”.

The remaining recordings in this set were made during Stokowski’s final years in England. His last public concert in the UK took place in 1974 when he was 92 but he then decided to take a respite from the rigours of live concerts and concentrate on recordings instead. These were made with specially selected musicians who came together for Stokowski’s sessions as the National Philharmonic.

The Maestro’s final recording sessions were devoted to two of the most youthful symphonies ever written, Mendelssohn’s Fourth and Bizet’s Symphony in C. On the final day of the recording, 4 June 1977 the Bizet finale was taped in one complete take which needed no editing. It is that complete take which went onto the finished recording and – since it was the very last time Stokowski conducted – it has considerable historic significance.

The sound has all of the Stokowski richness and body. The Bach, in particular, is fantastic with amazing solos from Kincaid and Brusilow. Stokowski recorded the de Falla several times and this may be his finest...the Stokowski transcriptions...is simply amazing