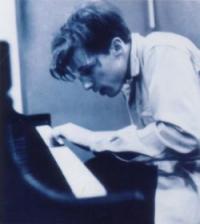 Glenn Herbert Gould was a Canadian classical pianist. He was one of the best known and most celebrated pianists of the 20th century, and was renowned as an interpreter of the keyboard works of Johann Sebastian Bach. Gould's playing was distinguished by a remarkable technical proficiency and a capacity to articulate the contrapuntal texture of Bach's music.

Gould rejected most of the standard Romantic piano literature by Chopin, Liszt, Rachmaninoff, and others, in favour of Bach and Beethoven mainly, along with some late-Romantic and modernist composers. Although his recordings were dominated by Bach and Beethoven, Gould's repertoire was diverse, including works by Mozart, Haydn, and Brahms; pre-Baroque composers such as Jan Pieterszoon Sweelinck, William Byrd, and Orlando Gibbons; and 20th-century composers including Paul Hindemith, Arnold Schoenberg, and Richard Strauss.