Tomorrow will be the eightieth anniversary of the birth of the extraordinary Canadian pianist Glenn Gould, and in a couple of weeks it will be the thirtieth anniversary of his death. He was a legend in his own lifetime, selling well over a million records worldwide by the time of his death (and that’s despite retiring from the concert circuit in 1964 at the age of just 31). It was his 1955 recording of the Goldberg Variations which was playing when surgeon Christiaan Barnard carried out the first successful heart transplant in Cape Town in 1967; and his recording of Bach’s Well-Tempered Clavier which was chosen as some of the music tracks on a gold-plated copper disc enshrining the human race’s greatest and most significant achievements which NASA sent into space on the Voyager 1 space probe in 1977. 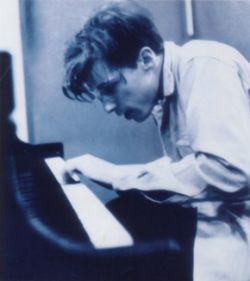 But what is almost more amazing is that he has remained such a vital force in the years after his death. His 1981 recording of the Goldberg Variations had sold over two million copies alone by the year 2000, and now to mark the combined anniversaries Sony have just released a whole myriad of products to celebrate his genius.

I’ve been delving into all these wonderful recordings over the last couple of weeks and remain awe-struck by the power and intensity of his performances. He plays with a kind of deliberate non-legato (almost always without using the sustaining pedal). You might expect this to make the music sound rather dry and unattached, and while I have to admit I’m not convinced with this somewhat non-sentimental approach for composers like Beethoven and the other early romantics, for Bach (which he was of course most famous for) it is nothing short of revelatory.

His Bach has such clarity in the textures that you hear details that show the music in a whole new light. He carefully chose to use instruments with a very clear bass register, and is able to bring out all the individual voices in the fugues with breathtaking lucidity. Yet despite his staggering technique, he was so much more than just a technician, as is instantly shown by the way in which he varies repeats, or by listening to the staggeringly different first and second versions of the Goldberg Variations.

Of the five items listed below the first two are beautifully presented hardback mini books, both at very attractive prices. ‘This is Glenn Gould’ has one disc of Bach, and one of non-Bach, and while in some ways frustrating as there are a lot of bits of works rather than all complete works, the nearly two hundred page booklet full of rare photos, an extensive chronology of Gould’s life and an imaginative A-Z more than makes up for it.

The ‘Best of Glenn Gould’s Bach’ has some of his greatest Bach recordings, an interesting and well written essay on Gould’s Bach, and as a real bonus a DVD of the complete 1981 Goldberg Variations directed by Bruno Monsaingeon. To be honest this is worth buying for the DVD bonus alone!

The ‘Glenn Gould: Complete Bach Collection’ comprising 38 CDs and 6 DVDs is one of the most beautifully presented editions you’ll ever see, including a stunning nearly 200 page hardback book containing all the original LP covers, track listings and essays – many by Gould himself. It is unfortunately also rather heavy so if you live outside the UK and Western Europe we may need to charge a small supplement to cover the extra postage costs (please contact us for details), but it is a item I think you’d cherish for the rest of your life!

‘Glenn Gould: The Schwarzkopf Tapes’ is something of a curiosity, containing six Strauss songs (three of which have never been issued before) recorded with soprano Elisabeth Schwarzkopf in New York in 1966. The session itself was a spectacular failure as the two artists clashed on virtually everything, but the results as heard here are none the less intriguing.

And finally as a way of representing virtually all Glenn Gould’s recorded output is the ‘Glenn Gould Anniversary Edition’, comprising two DVDs and twenty sets ranging from 2-6 discs each, showcasing many of his greatest recordings. 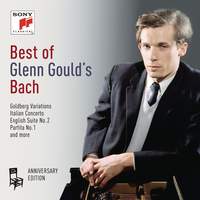 The Best of Glenn Gould's Bach

Glenn Gould (piano) This is a mid-priced release on the Sony Classical label, containing 2xCDs and a DVD of the complete Goldberg Variations, packaged in a limited edition, deluxe, hardbound book. 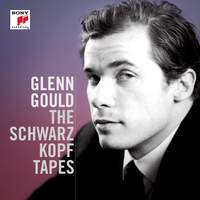