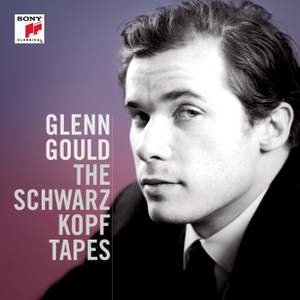 Not a collaboration, more a collision. Schwarzkopf’s fruity soprano fights to a draw against Gould’s stern minimalism...The stylistic clash — both frightful and fascinating — is immediately apparent... — The Times, 12th October 2012, 3 out of 5 stars More…

An extraordinary encounter: in January 1966 eminent soprano Elisabeth Schwarzkopf and eccentric pianist Glenn Gould met in an overheated New York studio to record songs by Richard Strauss. Two extreme worlds were bunched together and, as a result, the recording session was a spectacular failure. Contained on this CD are three previously released songs from this legendary meeting, three previously unreleased Strauss songs, as well as more music by the composer Gould valued so highly.

Not a collaboration, more a collision. Schwarzkopf’s fruity soprano fights to a draw against Gould’s stern minimalism...The stylistic clash — both frightful and fascinating — is immediately apparent with the first of the three Ophelia songs...All riveting stuff, this, at least if you consider Gould a genius. And if you count him too eccentric for words, well, you could always file away this CD as a comedy album.