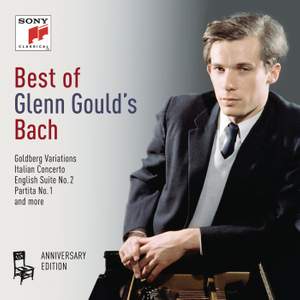 The Best of Glenn Gould's Bach

The ‘Best of Glenn Gould’s Bach’ has some of his greatest Bach recordings, an interesting and well written essay on Gould’s Bach, and as a real bonus a DVD of the complete 1981 Goldberg Variations... — Chris O'Reilly, Presto Music, 24th September 2012 More…

Variation 3. Canone all' Unisuono. a 1 Clav.

So much has been written about the sensation caused by Gould’s first studio recording of the Goldberg Variations in June 1955 that it is hardly necessary to repeat the story of this “birth of a legend” here. But even though it was this recording that laid the foundations for Gould’s international reputation as a Bach interpreter, its roots lie much further back. From the very outset his Bach had been as unconventional as it was distinctive – and so it remains, in spite of regular attempts to enthrone a “new Glenn Gould”. (Conversely, this has meant that every new recording of Bach’s keyboard works is judged by Gould’s standards.) His habit of slouching over the piano, the expansive gestures of his hands and arms, his stabbing nonlegato (almost always without the use of the sustaining pedal), his breathtaking polyphony and his often extreme tempi all result in a kind of pianism that seems to come from another planet, reminding us of Stefan George’s poem in Schoenberg’s Second String Quartet, “Entrückung” (Rapt Otherworldliness): “I breathe air from another planet.” [...]

Language: English (with subtitles in French and German)

This is a mid-priced release on the Sony Classical label, containing x2 CDs & a DVD, packaged in a ltd edition, deluxe, hardbound book.

The ‘Best of Glenn Gould’s Bach’ has some of his greatest Bach recordings, an interesting and well written essay on Gould’s Bach, and as a real bonus a DVD of the complete 1981 Goldberg Variations directed by Bruno Monsaingeon. To be honest this is worth buying for the DVD bonus alone!