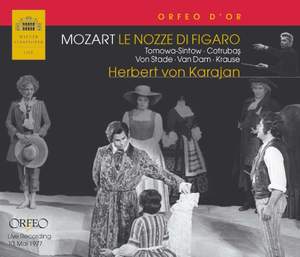 The Staatsoper orchestra is at its most technically brilliant and tonally scrumptious...Onstage the linchpin is the lovable Cotrubas, unfailingly resourceful and in wonderful voice...The Almavivas... — International Record Review, June 2012 More…

Herbert von Karajan famously resigned as director of the Vienna State Opera in 1964, but in May 1977 he was persuaded to return for a handful of performances with the company. His restudied production of Verdi’s 'Il trovatore' opened on 8 May and was followed only two days later by Mozart’s 'Le nozze di Figaro' in a staging previously seen at the Salzburg Festival, where it had been a resounding success. The Vienna performances were by no means a routine revival, and it is almost certainly impossible to imagine a more consistent and coherent ensemble than the one that was found in Vienna at this time, when all the participants were at the top of their form. José van Dam as the eponymous hero and Ileana Cotrubas as his fiancée, Susanna, were a picture-book couple with their distinctive voices and a charming way with the text. Still at the start of her international career, Anna Tomowa-Sintow was making her State Opera début and brought the Countess to vibrant life, producing an affecting portrayal of the melancholy mood and belligerent resolve of a woman faced with the loss of her happiness in love. In the minor role of Barbarina Janet Perry completed the illustrious line-up of sopranos, while Frederica von Stade, with her lean-toned mezzo, was altogether exemplary as the youthful Cherubino. As the Count, Tom Krause presented a convincing portrayal not only of the philanderer flaring up at such competition but also of the nobleman caught between his personal inclinations and his awareness of his own social standing. The cast is completed in the finest buffo tradition by Jane Berbié as Marcellina, who succeeds in treading a fine line between comic crone and loving mother; Jules Bastin as a well-seasoned incompetent lawyer; Heinz Zednik as a wonderfully venomous intriguer Don Basilio; and – luxury casting, indeed – Zoltán Kelemen as the ranting gardener, Antonio: Kelemen had been the Alberich in Karajan’s Salzburg Ring and had sung the same role in the 1976 centenary production of the cycle in Bayreuth. He died, far too young, in May 1979. The palpable delight of all the members of the cast in Jean-Pierre Ponnelle’s production is clear from this live recording from Austrian Radio. Most remarkable of all, however, is the brilliance and verve of Karajan’s conducting of the Vienna State Opera orchestra, ethereally light and yet whizzing along. The result is a timeless performance of Mozart, flexible from the very least nuances to the sudden outbursts of focused high spirits.

The Staatsoper orchestra is at its most technically brilliant and tonally scrumptious...Onstage the linchpin is the lovable Cotrubas, unfailingly resourceful and in wonderful voice...The Almavivas offer instruments rather more powerful than is usual in these roles...Among the others, there is above all von Stade...her Voi che sapete is simply perfection - possibly the finest in the entire Figaro discography.

Karajan's approach is, as you'd expect, carefully moulded. But some of his tempi are surprisingly fast – the beginning of the second-act finale has a wonderfully light touch, for instance – though wit and spontaneity are in short supply.