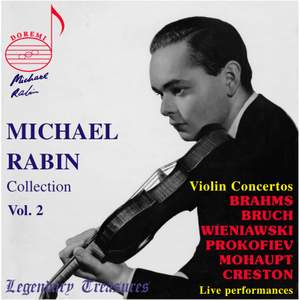 Michael Rabin was an American virtuoso violinist of Romanian descent. During a concert in Carnegie Hall, he momentarily lost his balance and fell forward, marking the beginning of a neurological condition which badly hindered his career. He died at just 35 after sustaining a head injury in a fall at his apartment in New York. This collection, recorded between 1950 and 1968, features works performed on many different occasions, including the Ravinia Festival.