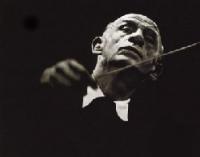 Dimitri Mitropoulos (1896-1960) was a Greek-American conductor. A piano pupil of Busoni, in 1930 he substituted for an indisposed piano soloist and simultaneously conducted the Berlin Philharmonic Orchestra. He made guest appearances in the United States and was conductor of the Minneapolis Symphony Orchestra (1937-49), and of the New York Philaharmonic (1949-58). Mitropoulos wrote an opera and transcribed for orchestra many of J. S. Bach's organ works. He became a U.S. citizen in 1946.