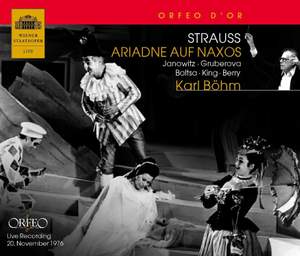 Agnes Baltsa is a pert, ultra-stylish Composer...Trusting in his fine male cast, Bohm (in what one may call 'late style') allows the Harlequin accompaniments to become very bar-room - apt, and... — Gramophone Magazine, May 2012 More…

Many productions at the Vienna State Opera can claim to be model interpretations of the works in question, and this is certainly true of the new production of Richard Strauss’s Ariadne auf Naxos that opened in November 1976. The production is still in repertory after thirty-five years, and a number of the singers who took leading roles in the 1976 production have continued to appear in Vienna over the years and in some cases over the decades. As Zerbinetta, for example, Edita Gruberova was heard more than ninety times at the State Opera alone, mostly in this 1976 production. The brilliance of her coloratura singing and the subtlety of her characterisation made her a popular favourite with press and public alike. Many of the members of the 1976 audience must have suspected that in the brief duet between Gruberova and Baltsa they were hearing two of the leading bel canto exponents of later years, making it all the more gratifying to be able to recapture that moment now on CD. The roles of Ariadne and Bacchus were taken by Gundula Janowitz and James King, by this date in their careers both fully established in their roles. With casting like this, the difficult final scene in the opera with its ‘miracle of transformation’ does indeed become the culmination of the evening. Janowitz, with her laser-sharp accuracy, has already triumphed in Ariadne’s great laments and James King has mastered the terrors of the god’s brief entrance scene. King sang this role over a period of three decades, fully equal to the demands of the part and entirely worthy of being immortalised on disc.

Who, finally, can compete with Karl Böhm on the conductor’s podium in terms of his long experience of Ariadne? The first night flowed along with an ideal balance between stage and pit, the smallest of the secondary roles were convincingly cast: this was due above all to a great conductor intimately familiar with Strauss’s music.

Agnes Baltsa is a pert, ultra-stylish Composer...Trusting in his fine male cast, Bohm (in what one may call 'late style') allows the Harlequin accompaniments to become very bar-room - apt, and he's always there to pick them up after showtime. Finally, there's James King's Bacchus, in good form and seeming to have gone even further with his personal investigation of how best to vocalise this not always grateful role.

82-year-old Karl Bohm infuses the entire performance with astounding energy...Ariadne's womanliness and glowing passion are palpable here, with Janowitz offering a degree of expressive detail I had not expected...The men do very well...Of course, the show belongs to Gruberova in what was to become her signature role...She has more than sufficient charm and delicacy while also being able to convey the two sides of Zerbinetta