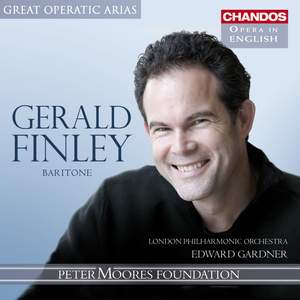 Iolanthe, Op. 69: Aria: My only beloved Mathilde I claim

The Silver Tassie: Oh bring to me a pint of wine

One of the leading baritones and dramatic interpreters of his generation, Gerald Finley is an artist who sets alight the stage and delights the ear in whatever the role he portrays.

On this (his first arias disc, and first for Opera in English) he explores a broad range of repertory: old favourites, hidden treasures, and roles which he himself has created, among them J.Robert Oppenheimer in John Adams’s Doctor Atomic and Harry Heegan in Mark-Anthony Turnage’s The Silver Tassie.

Gerald has won accolades across the globe including Gramophone Editor’s Choice Award at the 2006 Gramophone Awards for Stanford: Songs of the Sea (CHSA5043).

English National Opera director Edward Gardner offers a great understanding of Opera in English, and here conducts the London Philharmonic Orchestra in his debut on Chandos.

All essentials for a recital are present here: the featured artist in good voice, imagination capable of bringing 13 different characters to life..., apt recording decisions and on-the-pace accompaniment...Both Gerald Finley and Edward Gardner are natural time-travellers in lyric theatre

Opera recital discs too often play safe with repertoire. Not here. This intelligent compilation...satisfyingly mixes popular with unfamiliar. Finley, a versatile stage presence, brings integrity to every dark, burnished note he sings. All these arias come alive, even robbed of their original context.

As this recital of operatic arias in English handsomely demonstrates, Finley has it all: a rich-toned and smoothly produced voice, crisp diction, sterling technique, immaculate legato, a keen sense of musical style and unfailing sensitivity to drama and character.