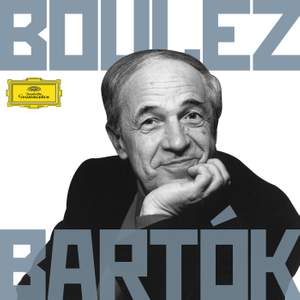 I. An Evening In The Village

1st Dance: Dance of the Princess in the Forest

2nd Dance: Dance of the Trees

3rd Dance: Dance of the Waves

4th Dance: Dance of the Princess with the Wooden Doll

5th Dance: The Princess Pulls and Tugs at the Wooden Prince and Tries to Make Him Dance

6th Dance: She Tries to Attract the Real Prince with Her Seductive Dancing

7th Dance: Dismayed, the Princess Attempts to Hurry after the Prince, but the Forest Bars Her Way

Allegro: The Girl Sinks Down to Embrace Him

Sempre vivo: The Tramps Leap Out

Agitato: Again, the Frightened Tramps Discuss How to Eliminate the Mandarin

Molto Moderato: The Body of the Mandarin Begins to Glow with a Greenish Blue Light

Più mosso - Vivo - She Resists No Longer - They Embrace.

The 2009 Kyoto Prize for Music, bestowed once every four years since 1985 by the Inamori Foundation, has been awarded to Pierre Boulez. This great distinction, similar in intent to the Nobel Prize, recognizes outstanding achievement in the fields of philosophy, arts, science, and technology. Awards are to leaders in their respective fields as well as individuals whose work has contributed significantly to humanity.

In honouring Pierre Boulez as a leader “in the world of Western music since World War II”, the Inamori Foundation has referred to his all-embracing and path-breaking activities as composer, conductor, writer, teacher, lecturer, and founder/director of musical institutions as well as to the creative stimulus and influence he has exerted and continues to exert in each of these aspects of his extraordinary career. Congratulations to Maestro Boulez on the receipt of this singular honour!

"As composer and conductor, Boulez has done more than any other person alive to define the idea of what modern music is, and how it should sound.” The Guardian

Over the past 18 years Pierre Boulez has made a series of critically acclaimed recordings (including two Grammys) for Deutsche Grammophon of Bartók’s major orchestral works (principally with the Chicago Symphony Orchestra), the complete concertos with leading international soloists and complete stage works. Here is the entire collection on eight CDs, gathered together in a single specially-priced box for the first time