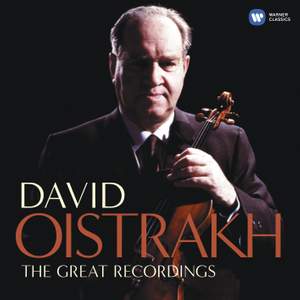 Mozart: Rondo for Violin and Orchestra in B flat, K269

Shostakovich: Violin Concerto No. 1 in A minor, Op. 99 (Burlesque)

EMI Classics are proud to be able to present this 17-CD set of some of the finest recordings by David Oistrakh, one of the truly great violin virtuosi of the past 100 years. Like Nathan Milstein, five years before him, Oistrakh was born in Odessa in the Ukraine, on 30 September 1908, and grew up and was educated in what was soon to become the Soviet Union. In spite of this he was a frequest visitor to the West and, in his early years, took part in many of Europe's best-known instrumental competitions, winning first prize in many cases.

During World War II Oistrakh gave many concerts in his homeland: at the front, in factories and hospitals and in besieged Leningrad. Being an eager advocate of new music brought him into contact with most Soviet composers of the time and he befriended many of them. Prokofiev, Shostakovich, Miaskovsky, Khachaturian, Rakov and Vainberg all dedicated works to him, many of which were specially written for him.

Aside from his activities on the concert platform Oistrakh also taught many young and up-coming violinists amongst whom were Oleg Kagan, Gidon Kremer, Cyrus Forough and his own son, Igor Oistrakh.

After an immensely successful international career Oistrakh suffered a fatal heart attack whilst working with the Concertgebouw Orchestra in Amsterdam in 1974. His remains were returned to Moscow where he was interred in Moscow's famous Novodevichy Cemetery where, in 2007, Rostropovich was also buried. The asteroid '42516 Oistrakh' is named in honour of him and his son Igor.

Oistrakh was a prolific recording artist and left behind him a large legacy of incomparable recorded performances. Naturally, the majority of these recordings were made for Melodiya, the Soviet State recording company, but EMI Classics are privileged to have worked with Oistrakh in the studio more than any other record company in the West and these recordings are not only technically superior but are of immeasurable musical worth.

This unique set brings together for the first time all of Oistrakh's EMI recordings on 17 CDs. The collection includes most of the great works of the violin repertoire, both solo and concerto, and there are some fine examples of Oistrakh as a player of chamber music.