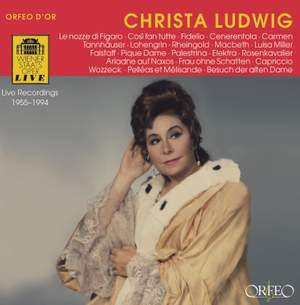 Act I: Grausames Schicksal! Sagen will

Live Recordings 1955 - 1994. The wide-ranging repertory in which Christa Ludwig appeared at the Vienna State Opera, often surprising her audiences over a period of many years, is central to the present set of three CDs issued to mark her 80th birthday. It begins with her Cherubino from Le nozze di Figaro and her Composer from Strauss' Ariadne auf Naxos, both of which she sang at the Salzburg Festival soon after her Vienna State Opera début in 1955. Another of her early roles in Vienna was Dorabella, while Angelina in Rossini's La Cenerentola was a lyric mezzo-soprano part that she sang only infrequently but to which she brought a stupendous coloratura technique. Her increasingly dramatic roles are represented by excerpts from Fidelio, Wozzeck,Tannhäuser, Lohengrin and Verdi's Macbeth, which also demonstrate the astute use of her resources in those roles that extend well into the soprano register, without ever sacrificing any quality or intensity. Under Leonard Bernstein, the subdued melancholy of her Marschallin is even more overwhelming than it was in the studio. No less impressive is the way in which Christa Ludwig was able to forge a successful working relationship with each of the very different conductors with whom she appeared, be it Karl Böhm, Herbert von Karajan, Lorin Maazel, Claudio Abbado or the conductor of the most recent New Year's Day Concert from Vienna, Georges Prêtre.Throughout her career, she retained a company spirit, happy to appear in smaller roles and, towards the end of her career, in character parts, including Klytämnestra in Elektra, the role in which she bade farewell to the stage in 1994.This final appearance - almost 40 years after her Viennese début - also brings to an end our musical tribute to Christa Ludwig, recalling an altogether exceptional career by this honorary member of the Vienna State Opera.