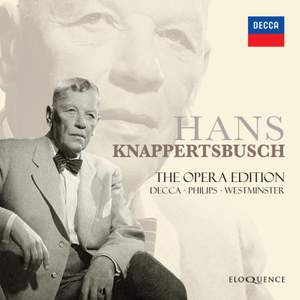 The complete VPO Meistersinger with Paul Schöffler as Hans Sachs, recorded in September 1950 and September 1951, finds Knappertsbusch at his most affable and emotionally generous, though the... — Gramophone Magazine, July 2022 More…

A priceless collection of Hans Knappertsbuschs opera recordings made for Universal Music labels, including the legendary live Parsifal performances of both 1951 and 1962, the Vienna studio Die Meistersinger of 1950-51, the Munich Fidelio of 1961, as well as operatic excerpts and highlights. For singers such as Birgit Nilsson, Jon Vickers, George London and Hans Hotter, Knappertsbusch was the supreme Wagnerian. Audiences at the 1951 Bayreuth Festival were enraptured by the many beauties of his Parsifal not only its patience but its steady unfolding, as if in a ritual, and the Decca recording became the first complete set of the opera on LP. Reissued on CD by many different labels, it returns to Decca here in the company of the 1962 account from Bayreuth, quicker and more flexible and perhaps even more attuned to the human drama of Wagners final opera.

Perhaps no one has conducted Parsifal more frequently than Knappertsbusch: over 200 times during a career that spanned just over half a century. His Wagner interpretations gained their unique authority from his study of the operas at Bayreuth under the direction of Hans Richter and the composers son, Siegfried. His career was centred around performing all the mature music-dramas at the State Operas of Vienna and Munich, and latterly at Bayreuth. He had a bond of particular affection with the Vienna Philharmonic, and recorded albums of Wagnerian excerpts with them throughout the 1950s, including the Wesendonck Lieder and the First Act of Die Walkure with Kirsten Flagstad.

The complete studio recording of Die Meistersinger, from 1950-51, belies the idea that Knappertsbusch did not respond to a studio environment; it remains one of the most heart-warming accounts on disc. The same broad vein of humanism runs through his Fidelio recording with the Bavarian State Opera from 1961 and a strong cast led by a still youthful-sounding Jan Peerce and Sena Jurinac. Albums of Wagnerian excerpts from Zurich in 1947 preserve the artistry of Maria Reining and Paul Schoffler at their peak. Much here has long been unavailable on Decca; newly remastered, compiled with a new essay on the conductors life and career by Peter Quantrill, the set is an essential acquisition for both devotees and sceptics of Knappertsbuschs fallible genius.

One of the great achievements in the history of the gramophone For years to come, this set of records will be treasured as an almost perfect realization of Wagners last, strangest and deepest thoughts. The Record Guide (Parsifal, 1951)

Schoffler is probably the best Sachs now living; his performance is full of wisdom and mellow humour beautifully articulated and audible detail in all parts of the orchestra. The Record Guide (Die Meistersinger)

Well-nigh ideal The main cast could hardly have been better chosen Above all, the conductor must be congratulated upon an interpretation which, in natural musicality, passion and subtlety, will not easily find its equal. Opera, August 1952 (Parsifal, 1951)

Here is Wagner set forth in the grand old manner and with unerring musical conviction Sets a standard of stereophonic opera recording which may well serve as the yardstick for most future efforts in the field This recording represents the most authentic Wagnerian styling to be had at this time... Stereo Review, December 1958 (Die Walkure, Act I)

An enormously impressive achievement The tempos here are less slow than one might have expected from this conductor everything is made to move along, although the fervent spirit of the music and text is always foremost. The balances between soloists and orchestra are extremely good, and the recorded sound is remarkably clear. Stereo Review, November 1965 (Parsifal 1962)

this is how great music sounds in the hands of fine musicians when it is truly known and loved Gramophone (Parsifal, 1962)

The complete VPO Meistersinger with Paul Schöffler as Hans Sachs, recorded in September 1950 and September 1951, finds Knappertsbusch at his most affable and emotionally generous, though the uproarious riot that closes Act 2 is just that.