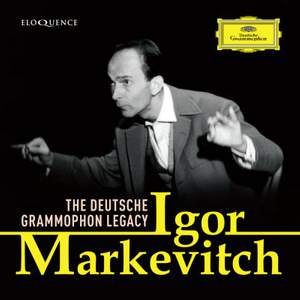 Gounod: Symphony No. 2 in E flat

Borodin: In the Steppes of Central Asia

Liadov: From the Apocalypse, Op. 66

I record so much I forget even my own records! Markevitch was a prolific recording artist for several labels, principal among them Deutsche Grammophon, HMV/EMI and Philips (Eloquence has also released a new, complementary collection of his Philips legacy). He felt more comfortable in the studio than many of his podium colleagues and viewed recording as the opportunity to bring out aspects of the score which could remain unheard by live audiences.

As a polymath, Markevitch turned from composition to conducting after the Second World War, and soon became one of the most in-demand conductors of his day, at home in a vast range of repertoire, equally at home in Classical-era symphonies by Haydn, Mozart and Beethoven, Romantic narratives by Berlioz, Wagner and Tchaikovsky, and contemporary Francophone composers such as Milhaud, Honegger and Roussel, bringing to each of them a sharp attack and acute sensitivity to colour and harmony.

Nowadays, many conductors follow Markevitchs lead in refusing to specialise: he was a man ahead of his time, and his analytical mind was well suited to the precision of DGs engineering teams. He worked with many of Europes finest orchestras, enjoying a productive relationship with the Berlin Philharmonic which resulted in many superb recordings from 195355, such as a pioneering album of symphonies by Schumanns Swedish contemporary, Franz Berwald. Late in 1956, an invitation to conduct the successor to Toscaninis NBC Symphony, the Symphony of the Air, resulted in lithe and athletic symphonic Beethoven (No. 3) and Brahms (No. 1)

Most of Markevitchs DG legacy, however, was made in Paris, with the Lamoureux Orchestra whose fortunes he revived as chief conductor between 1957 and 1961. This relationship produced fleet and graceful, French-accented Beethoven (Pastoral Symphony and overtures) and Brahms (Symphony No. 4) and a superbly cast Damnation of Faust still widely considered as the finest interpretation of Berliozs dramatic legend on record. Gounod, Bizet, Auber and Debussy receive no less vividly idiomatic treatment.

Markevitch was best known internationally as a fiery interpreter of Russian repertoire, represented here by virtuoso pieces of tone-colour and atmosphere from Lyadov, Rimsky-Korsakov, Borodin and Tchaikovsky, including two specialities, Francesca da Rimini and the Pathetique Symphony. He could also galvanise choruses to heights of dynamic response: DG recorded him in Haydns Creation, Mozarts Coronation Mass (twice, in Berlin and Paris, both reissued here) and the less familiar D minor Requiem of Cherubini and Gounods Saint Cecilia Mass. Recorded in Prague with the Czech Philharmonic in the early 1960s, these albums became Markevitchs swansong to DG. Featuring original covers and a new essay by Peter Quantrill, this box includes much material long unavailable on CD.

There has never been a Faust as totally idiomatic as this one. The score came home to Paris, as it were, not simply because of geography but more importantly, for the pure Gallic singing by the principals and the wonderfully piquant orchestral playing by the still traditional-sounding Orchestre Lamoureux None of this would count for much if Markevitch werent such a superb Berlioz interpreter equally superb Harold in Italy. Fanfare, March 2018

A marvel: the Coronation Mass directed by Markevitch and especially the sublime Maria Stader in the Agnus dei solo. Diapason, August 1990